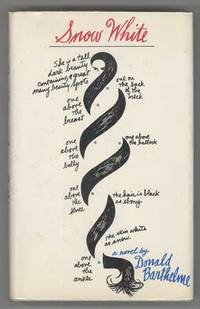 by Barthelme, Donald
New York: Atheneum, 1967. Octavo, cloth. First edition. The author's second book and first novel. "... a revisionist fantasy in which the Snow White tale is subjected to a ruthless (and hilarious) secularization, with absurdist timeslips working to pile anachronism on anachronism." - Clute and Grant (eds), The Encyclopedia of Fantasy (1997), p. 88. "This is an early postmodern short novel that would be politically incorrect by today's standards." - Datlow and Windling (eds.) Ruby Slippers, Golden Tears, p. 409. Klinkowitz, Pieratt & Davis AB1. A fine copy in fine white dust jacket. A very nice copy. (#110195) (Inventory #: 110195)
$250.00 add to cart or Buy Direct from L.W. Currey
Share this item
L.W. Currey Inc.
Offered by