THE UNDYING FIRE: A CONTEMPORARY NOVEL 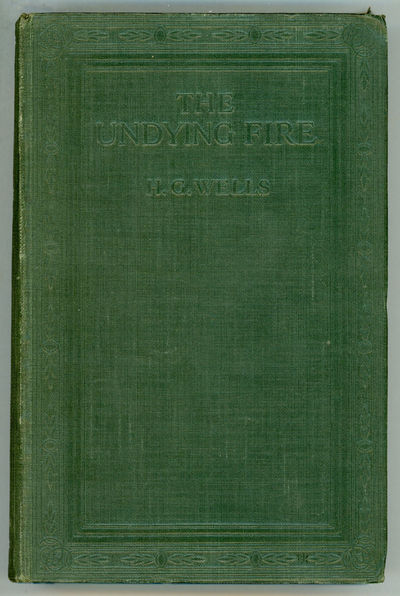 by Wells, H[erbert] G[eorge]
London, New York, Toronto, and Melbourne: Cassell and Company, 1919. Octavo, pp. [1-8] [1] 2-253 [254: printer's imprint] [255-256: blank] [note: last leaf (Q8) is a blank used as rear paste-down], original decorated green cloth, front panel stamped in blind, spine panel stamped in gold and blind, bottom edge untrimmed. First edition. This story of Job Huss, the headmaster of a progressive school, "is saturated with the ideas of educational reform and of the teaching of world history as the basis for a common civilization." - Wells Society 71. "THE UNDYING FIRE is one of his most ambitious dialogue narratives. It is in essence a modernized version of the BOOK OF JOB, a prose poem which Wells greatly admired... Apart from its dominant educational theme THE UNDYING FIRE is principally of interest today for the evidence it affords of Wells's pessimism at a time of world holocaust... Uneven though it is, the novel stands as a moving testimony to his quest for assurance during the trauma of world war." - Hammond, The H. G. Wells Companion, pp. 188-91. Bleiler (1978), p. 205. Reginald 15100. Wells 68. Hammond A16. Tiny spot on rear cover, else a bright, nearly fine copy. (#91139) (Inventory #: 91139)
$100.00 add to cart or Buy Direct from L.W. Currey
Share this item
L.W. Currey Inc.
Offered by