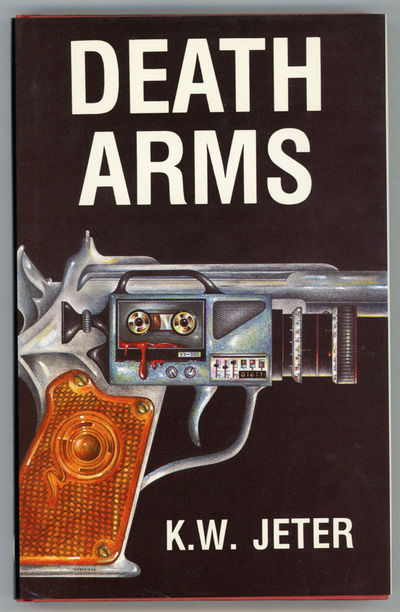 by Jeter, K. W.
[Bath, Avon]: Morrigan Publications, 1987. Octavo, cloth. First edition. 1010 copies printed of which this is one of 250 numbered clothbound copies signed by Jeter. This issue includes Jeter's "Afterword: The Young Man Comes to the City," pages 169-183, not printed in the 750-copy trade issue. In a decayed, entropic America the protagonist "finds himself embarked on a terrifying journey, fleeing from the agents of SCRAP and his own seemingly inevitable death. The journey becomes both a rite of passage and a race against time as he becomes aware of a conspiracy that will effect the future of mankind." - publisher's description. "A nifty piece of hard-boiled SF noir which starts of in a future Los Angeles deserted after a psychic event known as the Fear, and finishes, literally and metaphorically, in the desert ... It is brief, bleak and intense, over before you know it but leaving a curious resonance." - Paul McAuley, Interzone. Third book of a thematic trilogy, preceded by DR. ADDER (1984) and THE GLASS HAMMER (1985). Pringle, The Ultimate Guide to Science Fiction, second edition (1995), p. 92. Sargent, British and American Utopian Literature' 1986-2009. A fine copy in fine dust jacket. (#2763) (Inventory #: 2763)
$100.00 add to cart or Buy Direct from L.W. Currey
Share this item
L.W. Currey Inc.
Offered by