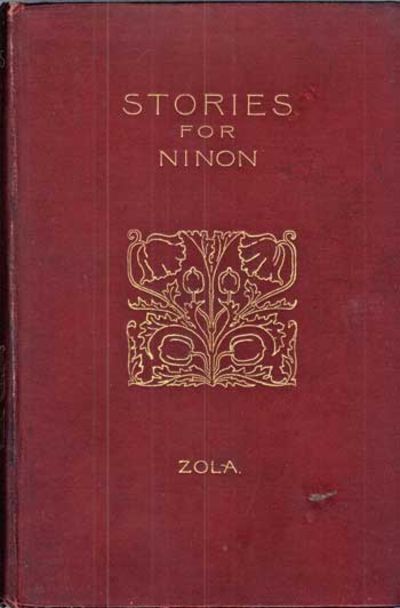 by Zola, Emile
London: William Heinemann, 1895. Octavo, pp. [i-iv] v-vi [vii-viii] [1] 2-344 + [14] pages of publisher's ads at rear, inserted frontispiece with portrait of Zola after a lithographic drawing by Will Rothenstein, original decorated burgundy cloth, front and spine panels stamped in gold, Heinemann monogram stamped in blind on rear panel, all edges untrimmed, cream endpapers. First edition. This translation combines material from Zola's first book, CONTES A NINON (1864), and a sequel of sorts, NOUVEAUX CONTES A NINON (1874). "Zola was infamous for his portrayals of the seamy side of human nature, but here we see a wounded idealism -- perhaps the larval stage of his naturalism -- expressed in many cases via the fantastic. Of the novella and seven short stories from Part I, all but three of the stories are fantastic in some way. 'Simplice' and 'The Love-Fairy' are fairly traditional fairy tales; 'Sister-of-the-Poor' is a devotional Catholic story about charity and miracles; 'The Adventures of Big Sidoine and Little Mederic' is an odd story about twins, a big brawny one and little brainy one, who become full-fledged giant and dwarf as the story progresses. 'Blood' is an antiwar vignette in which four comrades-in-arms narrate their horrific and phantasmagorical dreams, all drenched in blood, leading them to lay down their arms and desert. Part II has only one fantasy, 'The Paradise of Cats,' featuring a talking cat." - Robert Eldridge. Vizetelly was sentenced to three months in jail in 1889 for publishing some other works by Zola. Touch of rubbing to spine ends and corner tips, some faint marks to front panel, touch of darkening to spine, a tight bright copy, internally fine with mostly unopened pages. (#117049) (Inventory #: 117049)
$450.00 add to cart or Buy Direct from L.W. Currey
Share this item
L.W. Currey Inc.
Offered by