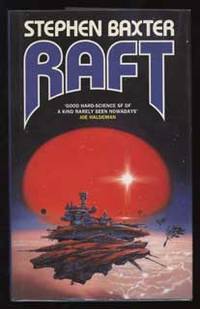 by Baxter, Stephen
[London]: GraftonBooks A Division of HarperCollinsPublishers, 1991. Octavo, boards. First edition. Signed inscription by Baxter to "Jim" on the title page. The author's well-received first book. "... RAFT features some of the most startling hard SF content in recent years. It is the first volume in the author's loosely connected Xeelee future history." - Anatomy of Wonder (2004) II-84. "Humans are stranded on a 'raft' in a pocket universe of enormous gravity. Baxter's debut novel, in which he describes his young hero's quest through a world that is strange indeed. As an all-too-rare example of British SF rooted in speculative physics, it has drawn praise from Larry Niven, Bob Shaw and others." - Pringle, The Ultimate Guide to Science Fiction, second edition (1995), p. [296]. "It is very, very hard SF, and it's great fun, and the cosmogonic precepts of its universe are challenging to grasp, and it's quite quickly told, and it's really dumb about people." - John Clute. A fine copy in fine dust jacket. (#89079) (Inventory #: 89079)
$750.00 add to cart or Buy Direct from L.W. Currey
Share this item
L.W. Currey Inc.
Offered by