ALLAN QUATERMAIN: BEING AN ACCOUNT OF HIS FURTHER ADVENTURES AND DISCOVERIES IN COMPANY WITH SIR HENRY CURTIS, BART., COMMANDER JOHN GOOD, R.N. AND ONE UMSLOPOGAAS .. 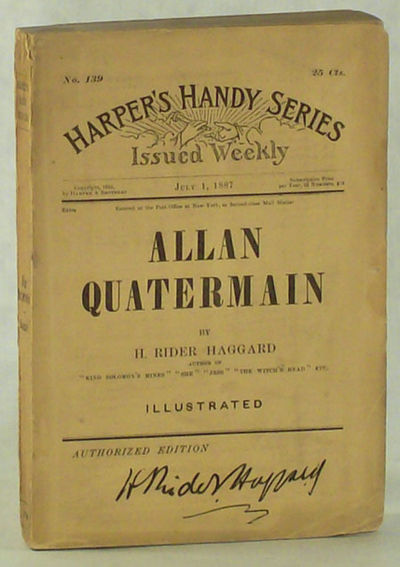 by Haggard, H[enry] Rider
New York: Harper & Brothers, 1887. Small octavo, pp. [1-2] [1-9] 10-310; [311-312: ads] [note: signatures signed (18) 2-228]. illustrations by C. H. M. Kerr, original brown wrappers, printed in black. First U.S. (or first authorized U.S.) edition. Probable later printing. The twenty full-page illustrations with blank versos (not included in the publisher's pagination) are integral to signed gatherings (not inserts) and ads on inside front wrapper list "Latest Issues" in the "Harper's Handy Series" from number 107 through number 142 (Locke by Thomas Fowler). Scott calls for two leaves of ads following page 310, probably in error as all copies we have examined have a single leaf of ads following page 310. Issued as "Harper's Handy Series" No. 139 with front wrapper dated 1 July 1887. Publication date for both U.S. and British editions was 1 July 1887. There were pirated American editions which also appear to have been published in July 1887. These include Rand, McNally & Co.'s "Globe Library," No. 26, with front wrapper dated 1 February 1887, which was listed in Publishers' Weekly 9 July 1887 (this issue also listed Harper's authorized American edition). Several other unauthorized American editions, including Norman L. Munro "Munro's Library" edition dated 31 May 1887 and George Munro's "Seaside Library" edition dated 29 June 1887 were listed in PW a week later, 16 July 1887. Scott 7A. Extremities of wrappers lightly chipped at head and tail of spine panel and several corners, but a beautiful copy of this fragile book. The Richard Manney copy with his bookplate laid in. (#31339) (Inventory #: 31339)
$750.00 add to cart or Buy Direct from L.W. Currey
Share this item
L.W. Currey Inc.
Offered by