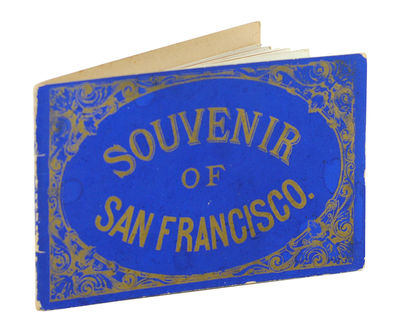 by [View Book].
Published by Ward Bros. Colum, (c. 1885). Oblong 12mo, original blue coated-paper wrappers, title gilt-lettered on front wrapper within elaborate gilt border, advertisement for M. J. Flavin & Co. of San Francisco gilt-lettered on rear wrapper within matching border. Twelve accordion-folded pp. bearing 14 sepia-printed images of San Francisco landmarks after photographs. Minor rubbing at backstrip & corners; but a very good, fresh copy. § First edition of this seemingly unrecorded viewbook. Ward Bros. of Columbus, Ohio, whose imprint appears in the margin of the final plate, produced a great many such viewbooks for locations both famous and obscure. This one includes the usual images of the Palace Hotel, the California Street Hill, Fort Point, the Cliff House and Seal Rocks, etc.; but there is one unexpected view: a full-page plate of a four-story edifice captioned "The Great I. X. L., San Francisco." The presence of this image is explained by the rear-wrapper advertisement which reads in full: "The Great I. X. L. / M. J. Flavin & Co., / Leading Clothiers, / Furnishers and Hatters / of the Pacific Coast. / 924 to 928 Market St., / San Francisco." It is clear that this viewbook was issued as a promotional gimmick for this now-forgotten clothier. Not recorded in OCLC, Rocq, Cowan, etc., or in any online library catalogue consulted. Rocq does record a single copy (at the Bancroft Library, but not appearing in its online catalogue) of a "Catalogue and price list of M. F. Flavin's great IXL," issued in San Francisco around 1883; see Rocq 9383. (Inventory #: 5831)
$300.00 add to cart or Buy Direct from
John Windle, Bookseller
Share this item