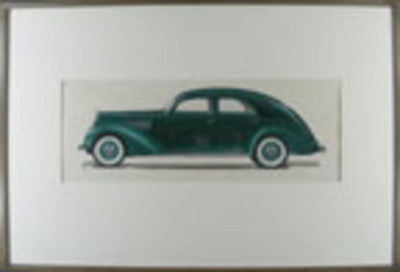 The old, established Willoughby firm of Utica, New York had a reputation for conservative, quality coachwork in 1930 when Viennese born Hoffmann was hired as draghtsman/designer. He quickly moved the company's design philosophy to the forefront of the streamline school, translating traditional luxury car body types such as this touring car into the modern idiom. Willoughby designed bodies for all the major luxury car firms. We have attributed this drawing to Hoffman on the basis of a very similar drawing of the period that was acquired in 1985 from Hoffmann's widow, clearly done by the same hand and exhibiting the same exquisite touch and sense of proportion. (Inventory #: 18797)
$4,500.00 add to cart or Buy Direct from
Donald A. Heald Rare Books
Share this item
Donald A. Heald Rare Books
Offered by