Woodrow Wilson: The Democratic Party Represents a Larger Part of the Progressive Power and Thought of the Country Than any Other Party 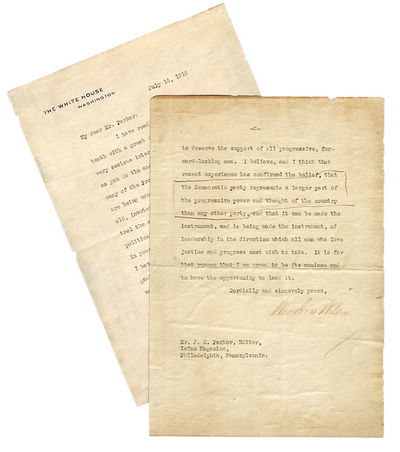 signed
by Wilson, Woodrow
“For myself, I sincerely desire and have tried to deserve the support of all progressive, forward-looking men.”Wilson’s progressive policies brought the Democratic Party back from the wilderness where it had languished since the Civil War, and resulted in establishment of the Federal Reserve System and the Federal Trade Commission, as well as passage of the Clayton Anti-trust Act and the Farm Loan Act. The nation’s leader during World War I, his idealism had a permanent effect on the goals of American foreign policy, and his internationalist outlook favoring U.S. involvement abroad came after World War II to be seen as prophetic.The 1916 Democratic Convention was held from June 14 to 16 and renominated Wilson. The Republicans had met a few days earlier, and in a move to reunite with their Progressive faction that had split off in 1912, nominated Supreme Court Justice Charles Evans Hughes, who was acceptable to all. Then the Republicans ran their campaign on the premise that Hughes had inherited the Progressive mantle of Theodore Roosevelt. Hughes was a moderate candidate and by no means the conservative that Taft had been. However, to President Wilson, the idea that the Republicans were the Progressives in the 1916 election was wrong, and he went about setting the record straight. In doing so, he explained what the Democratic Party stood for, and reflected on why he was “proud to be its nominee.”Typed Letter Signed on White House letterhead, two pages, July 14, 1916, during his reelection campaign, to J. C. Parker, Editor of Lefax Magazine in Philadelphia. “I have read your letter of July tenth with a great deal of attention and with very serious interest, and realize as keenly as you do the anomalous conditions by which many of the Progressive voters of the country are being confused and misled, as well as the old, inveterate attractions which seem to control the choice of many of them in matters political. In answer to the questions contained in your letter, I will say that, for my own part, I have no jealousy whatever of independent organizations intended to keep the independent voters of the country reminded of their obligations and fully informed as to parties and the conditions under which their votes are being solicited. For myself, I sincerely desire and have tried to deserve the support of all progressive, forward-looking men. I believe, and I think that recent experience has confirmed the belief, that the Democratic Party represents a larger part of the progressive power and thought of the country than any other party, and that it can be made the instrument, and is being made the instrument, of leadership in the direction which all men who love justice and progress must wish to take. It is for that reason that I am proud to be its nominee and to have the opportunity to lead it.” The magazine marked up page two of this letter for publication (Inventory #: 7488)
$5900.00 add to cart Available from Raab Collection
Share this item

﻿Kennedy Says the U.S. Must “grasp the opportunities and meet the challenges which confront us as a nation and as leaders in the free world.”