President Gerald Ford’s Inaugural Statement to Heal a Nation, Signed: “Our long national nightmare is over” Amongst the most famous words ever uttered by a U.S. President, they brought to a close the Watergate scandal and the traumatic and divisive events of the decade that preceded it. 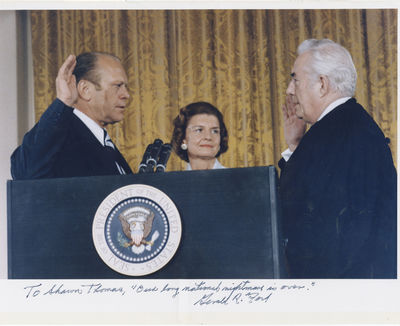 1974. Gerald Ford An imposing, oversize color photograph, and the only autograph quotation signed of this statement we have seenThe Sixties was launched in November 1960 when John F. Kennedy was elected President, and was off and running in January 1961 when the staid, conformist 1950s decade was swept away like so many dry leaves by the vigorous, inspirational and sophisticated new leader, his 31 year old wife Jackie, and the “best and brightest” team he brought to Washington to work with him on what he dubbed the New Frontier. The Kennedy years, known widely as Camelot, were full of excitement, but also saw Cold War tensions reach a height; indeed the Cuban Missile Crisis brought the world close to nuclear war. The bullets that ended President Kennedy’s life on November 22, 1963, brought it to an unexpected, dramatic conclusion. The nation was reeling, people were traumatized.Just months later, in the summer 1964, the Gulf of Tonkin Resolution (which authorized President Lyndon B. Johnson to conduct a war in Vietnam) and the Berkeley Free Speech Movement (the first serious student protest) initiated a rollercoaster of events in an exhausting decade. Then it all unfolded- the war, the casualty lists, the counterculture, the frenzy, the music, the competing philosophies, the generation gap, the riots, the assassinations of Robert Kennedy and Martin L. King, the drugs, the contentious politics - all played out, in all their permutations. And although the calendar indeed turned to 1970, with all of this still going on, in fact spiking, it still seemed like the Sixties.Like Johnson’s, the Nixon presidency was dominated by the war in Vietnam, but with a fostered confrontation between Americans who either opposed the war and supported the counterculture, or vice versa. People were at each other’s throats, the atmosphere was tense. Then in January 1973 there came the U.S. withdrawal of troops from Vietnam. By then the war had been going on so long, and was so central to people’s thinking, that there was a shock effect when it ended on January 27, 1973.Literally only three days later, the Watergate scandal broke, implicating first the President’s administration and then the President himself in wrongdoing and coverup. There was some shocking news or other seemingly every day. This was preceded by the resignation of Nixon’s Vice President Spiro Agnew under accusation of taking bribes, and the appointment of Gerald Ford to replace him. Then there were the Washington Post disclosures, the ever-augmenting crisis, the Watergate hearings in Congress (which were televised in full live), the convictions, the impeachment talk, and the climax of Nixon’s resignation in August 1974. It was totally absorbing, and unlike anything that had ever happened before.In a televised speech on August 8, 1974, Nixon announced to the nation that he would resign the presidency ""effective at noon tomorrow [August 9]."" At 9:00 AM on August 9, Nixon gave a farewell talk to an East Room assembly of White House staff and selected dignitaries, including the Cabinet and  Vice President Ford. It was an emotional event, with President Nixon nearly breaking down a number of times. When it was finished, Ford escorted Nixon to an Army helicopter, where the Nixon waved his famous ""v-sign"" before flying off to ""exile"" in California. The nation and world were watching this.Nixon's resignation was tendered to Secretary of State Henry Kissinger at 11:35 a.m. At that moment, Ford became the 38th President of the United States, although he took the official oath of office at 12:05 p.m. Once Nixon left the building, the White House staff began preparations for Ford's swearing in. More chairs were added for the much larger crowd of invited guests than was at the farewell. The oath was administered to Ford by Chief Justice Warren Burger. The United States had a new president.Ford gave a speech immediately after taking the presidential oath, an inaugural address of sorts. His goal was to heal an exhausted and divided nation, after 11 years of crisis, division, violence and frenzy. His soothing words at that historic moment are amongst the most famous ever uttered by a U.S. President: “My fellow Americans, our long national nightmare is over”. People sensed immediately that the frantic years were over, and we had entered a new era.Autograph quotation signed, showing Ford being sworn in as President by Chief Justice Burger, and inscribed to collector Shawn Thomas: “Our long national nightmare is over”. An incredibly rare autograph quotation signed, the only one of this statement we have seen. (Inventory #: 8852)
$9,000.00 add to cart Available from Raab Collection
Share this item

A Very Rare Signed Check of George Washington as President, Depositing Money in the Bank of the United States The money was proceeds from sale of land in the west, which Washington had invested in to help develop that area after the Revolution

09/1795
(click for more details about A Very Rare Signed Check of George Washington as President, Depositing Money in the Bank of the United States The money was proceeds from sale of land in the west, which Washington had invested in to help develop that area after the Revolution)

A Huge Signed Photograph of Ernest Hemingway at his Famous Lodge in Sun Valley, Idaho, Inscribed to His Friend and Boxing Coach, George Brown; The backstamp identifies this as a Life Magazine photograph taken by Capa, one of the great photographers of the era, who did photo essays on Hemingway for Life in 1940 and 1941

1940
(click for more details about A Huge Signed Photograph of Ernest Hemingway at his Famous Lodge in Sun Valley, Idaho, Inscribed to His Friend and Boxing Coach, George Brown; The backstamp identifies this as a Life Magazine photograph taken by Capa, one of the great photographers of the era, who did photo essays on Hemingway for Life in 1940 and 1941)
View all from this seller>