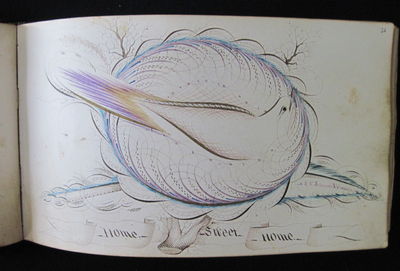 by Johnson S. I
N.p. , N.d. [1872]. Oblong 8vo., (4 x 7 inches), contemporary full dark green morocco with decorative stamping on both covers; spine expertly rebacked to match. In this album of 102 leaves, there are (mostly) nicely inscribed sentiments, signed and dated during the summer months of the year 1872. Many of the signers are from the Hudson River valley; others come from as far away as the southern United States, the Midwest, and there are contributors from Cuba and Colombia. A number of the leaves have small added penwork flourishes, but the highlight of the album is a series of FIVE FINELY RENDERED PAGES of birds, executed in purple, blue, gold and brown ink; each one is signed, S. I. JOHNSON, PENMAN. They are large examples of full color Off hand flourishing. On the facing pages, drawn in brown ink, there are five more examples of large flourished details of birds. All ten examples are very similar in style and execution to entry No. 62 in the catalogue, Calligraphy & Handwriting in America: 1710-1962, which is credited to an unknown penman. The signed examples of birds by S. I. Johnson are EXCEPTIONALLY FINE.Because of the disparity of the residences of the signers combined with the dates on which they wrote their entries, one can conclude that the album was not a record of a trip undertaken by the albums owner. Rather, it would seem that the book was signed either by visitors to his or her home, or, perhaps, it was signed by people who met (vacationed) at some watering place in New York. Also, because many of the pages are so meticulously inscribed it is possible that the people who signed the book had a common interest in calligraphy (and were attending a meeting of a society or group who shared that appreciation). Another possibility is suggested by the early appearance in the album of an etched vignette entitled RESIDENCE AND PLEASURE GROUNDS OF PROF. H. G. EASTMAN. PRESDT OF EASTMAN COLLEGE, POUGHKEEPSIE, N.Y. ON THE HUDSON that shows a horse drawn carriage leaving beautifully landscaped grounds upon which resides a stately house. Perhaps the signers were associated with the school. A handsome example of American folk art. Calligraphy & Handwriting in America: 1710-1962 Assembled and Shown by the Peabody Institute Library, Baltimore, Maryland. November, 1961—January, 1962.  FIVE FINE SIGNED EXAMPLES OFF HAND FLOURISHING (Inventory #: 1150.N.d. [1872])
$1,150.00 add to cart Available from Book Block
Share this item
The Book Block
Offered by