THE VALE OF CEDARS AND OTHER TALES ... With an introduction by Walter Jerrold .. 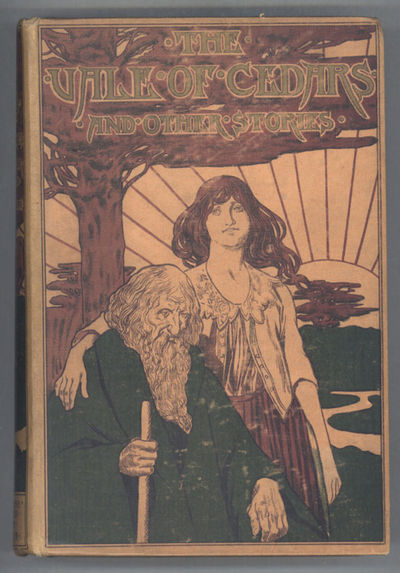 by Aguilar, Grace
London: J. M. Dent & Co. Philadelphia: The Jewish Publication Society of America, 1902. Octavo, pp. [i-ii] iii-viii [1-2] 3-428, title leaf is conjugate with frontispiece, is inserted, and is not reckoned in publisher's pagination, twelve inserted plates with illustrations, one in color, by T. H. Robinson, original pictorial tan cloth, front and spine panels stamped in brown, dark green and black, rear panel stamped in brown and green, t.e.g., other edges untrimmed, pictorial green endpapers. First edition. Reprints ten pieces of fiction, including two short novels, one of these being the title novel which is set in the Spain of Ferdinand and Isabella. Aguilar, a UK born devout Jew of Spanish ancestry, made use of that background in her fiction. At least two of the stories use traditional Jewish supernatural motifs. Aguilar published "several pioneering works on Judaism, including THE WOMEN OF ISRAEL (1845). Most of Aguilar's works were didactic novels which appeared posthumously, edited by mother, except for the often reprinted HOME INFLUENCE; A TALE FOR MOTHERS AND DAUGHTERS (1847)." - Blain, Grundy and Clements, The Feminist Companion to Literature in English, p. 11. The author died in 1847 at the age of 31. Cloth a bit rubbed and dusty, especially on rear panel, else a bright very good copy of this handsome book. (#128968) (Inventory #: 128968)
$45.00 add to cart or Buy Direct from L.W. Currey
Share this item
L.W. Currey Inc.
Offered by