The universal English short-hand; or, the way of writing English, in the most easy, concise, regular, and beautiful manner.. 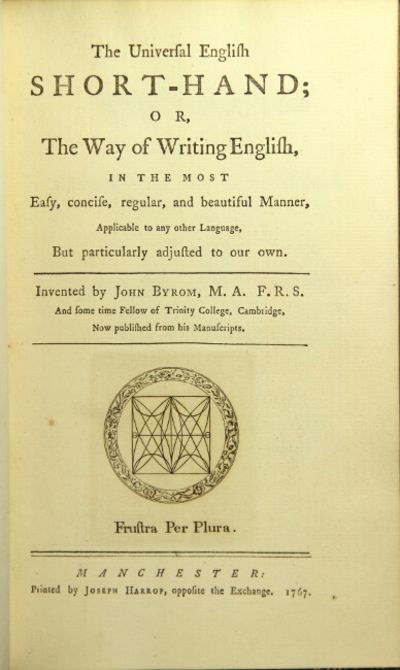 by Byrom, John
Manchester: Joseph Harrop, 1767. First edition and only edition, 8vo, pp. [4], ix, [1], [3]-92; engraved table and 12 engraved plates of shorthand characters; very good copy in contemporary full blue goatskin, elaborate gilt borders on covers incorporating stars, pineapples, shells, etc., elaborate gilt-decorated spine, red morocco label, a.e.g. With a 20th century 3-p. A.L.s from an Atherton Byrom tipped in, mentioning Byrom's shorthand system, and a miniature of him. Byrom was a poet and a teacher of shorthand. The system he devised was not printed until four years after his death, though he had printed a proposal to publish as early as 1723. "The method is in appearance one of the most elegant ever devised, but it cannot be written with sufficient rapidity, and consequently it was never much used by professional stenographers... Its publication marks an era in the history of shorthand, and there can be no doubt that the more widely diffused system published by Samuel Taylor in 1786 was suggested by and based upon that of Byrom" (DNB). Included is an interesting list of Byrom's students, among whom were the printers John Baskerville and Joseph Clowes, the poet Isaac Hawkins Browne, the philosopher David Hartley, and the Rev. Charles Wesley. Alston VIII, 246. (Inventory #: 28989)
$1,380.00 add to cart or Buy Direct from
Rulon-Miller Books
Share this item