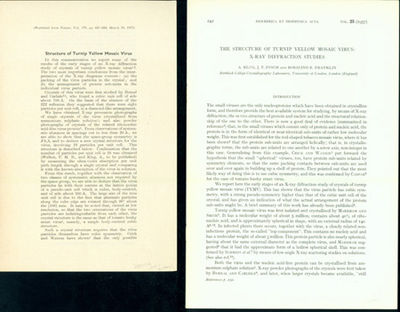 by Klug, Aaron; Franklin, Rosalind; Finch, John
1957. First edition. Klug, Aaron (1926- ); Franklin, Rosalind (1920-58); and John Finch. (1) Structure of turnip yellow mosaic virus. Offprint from Nature 179 (1957). [3]pp. 218 x 141 mm. Without wrappers as issued. (2) The structure of turnip yellow mosaic virus: X-ray diffraction studies. Offprint from Biochimica et biophysica acta 25 (1957). 242-252pp. Text illustrations. 244 x 168 mm. Without wrappers as issued. Together 2 items. Fine. First Editions, offprint issue. Rosalind Franklin, whose X-ray photographs of DNA were crucial to Watson and Crick's discovery of the molecule's double helix structure in 1953, began researching the molecular structure of selected plant viruses after moving from King's College to Birkbeck College in mid-1953. She was aided in this work by Aaron Klug, who would later win the 1982 Nobel Prize in chemistry for developing crystallographic electron microscopy and for elucidating the structure of biologically important nucleic acid-protein complexes. The two began investigating the structure of tobacco mosaic virus (TMV), making several important discoveries regarding the arrangement of the virus's protein subunits and RNA strand; later in their researches Klug and Franklin agreed to divide the work, with Franklin taking on TMV and other rod-shaped plant viruses, and Klug concentrating on spherical plant viruses such as turnip yellow mosaic virus (TYMV). Klug continued his virus researches after Franklin's death, first at Birkbeck and later at Cambridge University's MRC Laboratory of Molecular Biology, which he joined in 1962. The present papers report "the early stages of an X-ray diffraction study of crystals of turnip yellow mosaic virus (TYMV). This has shown that the virus particle has cubic symmetry, with a strong pseudo-symmetry higher than that of the cubic unit cell of the crystal, and has given an indication of what the actual arrangement of the protein sub-units might be" ("The structure of turnip yellow mosaic virus: X-ray diffraction studies," p. 242). Klug, Franklin and Finch briefly announced their findings in Nature (no. [1] above), following up with a longer paper published in Biochimica et biophysica acta (no. [2] above). . (Inventory #: 40706)
$3,750.00 add to cart or Buy Direct from
Jeremy Norman & Co.
Share this item
Jeremy Norman & Co., Inc.
Offered by