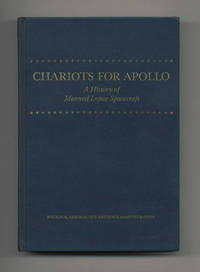 by Brooks, Courtney G. ; James M. Grimwood; Loyd S. Swenson, Jr.
Washington: National Aeronautics and Space Administration. Near Fine. 1979. First Edition; First Printing. Hardcover. A handsome first edition/first printing, thin vertical scratch to front board, else about Fine condition, bound in blue cloth over boards with spine and upper board titled in gilt; A History of Manned Lunar Spacecraft, NASA History Series, (NASA SP 4205) . Apollo was America's program to land men on the moon and get them safely back to Earth. In May 1961 President Kennedy gave the signal for planning and developing the machines to take men to that body, all else is history...; xviii, 538, [4] pages . (Inventory #: 15721)
$190.00 add to cart or Buy Direct from
Books Tell You Why
Share this item
Books Tell You Why, Inc.
Offered by

Vancouver : Heavenly Monkey , 2020
(click for more details about Books Are My Utopia)
View all from this seller>