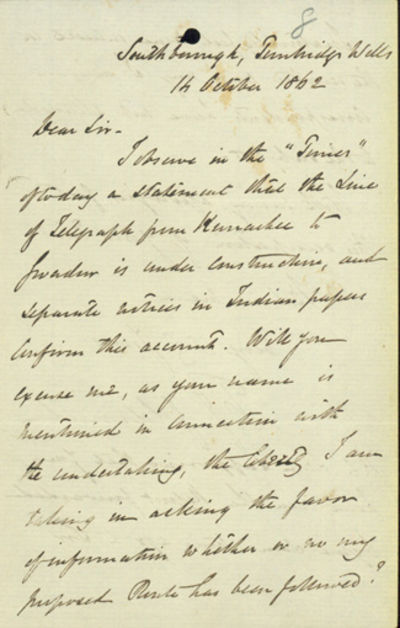 by Goldsmid, Frederic John
1862. Very Good. Goldsmid, Frederic John (1818-1908). A.L.s. to an unidentified recipient, probably Latimer Clark. Southborough, Tunbridge Wells, October 14, 1862. 2- pp. Small hole punched in upper margins, remains of mounting on verso of second leaf. 181 x 117 mm. Provenance: Latimer Clark. In 1864 Goldsmid was chosen to supervise the Herculean task of stringing telegraph cables from Europe across Iran and Baluchistan (now a part of Pakistan) to India. He was later a member of the team, headed by Colonel Patrick Stewart, that laid the Persian Gulf submarine telegraph cable. Upon Stewart's death in 1865 Goldsmid succeeded to the post of director-general of the Indo-European telegraph line. His letter, probably written to Latimer Clark, requests information regarding the laying of telegraph cable between Kunachee and Gwadar. Origins of Cyberspace 146. (Inventory #: 40730)
$450.00 add to cart or Buy Direct from
Jeremy Norman & Co.
Share this item
Jeremy Norman & Co., Inc.
Offered by