THE WRITINGS OF HENRY DAVID THOREAU 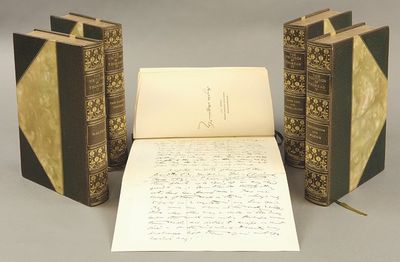 by Thoreau, Henry David
Boston and New York: Houghton Mifflin Company, 1906. Twenty volumes. Publisher's three quarter green crushed levant, raised bands, spines elaborately gilt extra, t.e.g., others rough-trimmed, silk ribbon markers. Plates, photographs, illustrations (some colored). Spines uniformly faded to medium brown, as are a few extremities, a few minor rubs, generic bookplate in each volume, otherwise a near fine set. The important "Manuscript Edition" of Thoreau's works, here in one of the publisher's deluxe bindings, adding an additional forty illustrations over and above the selection included in the standard clothbound sets. The photographs are by Herbert W. Gleason. One of 600 numbered sets (in addition to an unknown number of out of series sets), "signed" by the publisher, and containing in the first volume a leaf of autograph manuscript by Thoreau. In the present set, the leaf is filled, recto and verso, in ink, and bears a number of small corrections and insertions in pencil. The manuscript is a section of Thoreau's working draft toward the essay, "The Dispersion of Seeds," eventually published in book form in 1993 as part of Faith in a Seed: The Dispersion of Seeds and Other Late Natural History Writings. The leaf corresponds to substantial sections of the text (but obviously with significant variation) beginning in the published version (p.85): "It is remarkable how commonly you see the thistledown sailing low over water, and quite across such ponds as Walden and Fair Haven ....," and concluding, after authorial and then editorial interpolations of other text with "The outer part of the down of the upper seeds is gradually blown loose, while they are still retained by the ends of the middle portion, in loops attached to the core. Perchance at the tops of some more open and drier pods is already a little flock of these loosened seeds and down ..." (p. 91). While it is not unusual to find mention of Walden Pond in leaves contained in the Manuscript Edition, those that do are traditionally cherished to a somewhat greater extent than those that don't. Volumes seven through twenty print for the first time the substantially complete portion of Thoreau's journal, edited by Bradford Torrey, and the selection of letters appearing in volume six is expanded over the previous edition. [Only the first volume is on exhibit]. BORST B3. BAL 20145. (Inventory #: WRCLIT61740)
$17,500.00 add to cart or Buy Direct from
William Reese Co. - Literature
Share this item

OTHERS A MAGAZINE OF THE NEW VERSE

Grantwood NJ, New York, and finally Chicago 1918
(click for more details about OTHERS A MAGAZINE OF THE NEW VERSE)
View all from this seller>