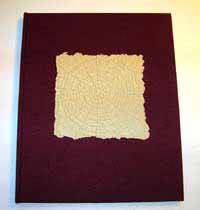 by Red Angel Press. Edwards, Jonathan
Bremen, ME: Red Angel Press, 2009. Artist's book, first edition thus, one of 50 copies, all on Lana Antique Laid paper, each numbered and signed in pencil by the printer / artist, Ronald Keller. Page size: 8-3/4 x 7-1/8 inches; 34pp. Bound by the printer / artist, Ronald Keller, in burgundy cloth over boards with paper mache bas belief of spider web onlaid to front panel. The text is illustrated with 5 woodcuts of various spiders, including the Black Widow Spider, Tarantula, Black and Yellow Garden Spider, all of which were hand pulled. The text is hand set in Bembo and printed on Lana Antique Laid paper. the text is a letter written in 1723 by Jonathan Edwards to Judge Paul Dudley, a friend of his father, discussing spiders, a creature keenly observed by Jonathan since his boyhood.
Jonathan Edwards (1703-1758) preacher, theologian and missionary to Native Americans, is known as one of this country's great intellectuals. His published writings are his sermons and theological tracts. He served as president of the College of New Jersey, later to be named Princeton. His interest in science begun at an early age is here documented. (Inventory #: 10254)
$450.00 add to cart or Buy Direct from
Priscilla Juvelis
Share this item

Anne with an e (Anne of Green Gables)

Ft. Lauderdale, FL 2019
(click for more details about Anne with an e (Anne of Green Gables))
View all from this seller>