The Famous Economist David Wells Writes About Taxes: "Your Inclination to the Old Paganism of Taxing Personal Property... the Recent Decisions of the U.s. Courts In Reference to the Taxation of Negotiable Instruments, State, City Railroad Bonds... Struggle to Keep Up System That Is Certain to Prove Unsatisfactory" 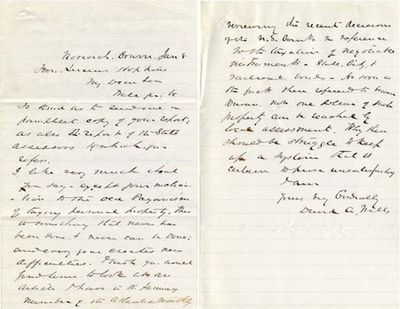 signed
by DAVID A. WELLS
(1828-1898). A prominent American economist, Wells began as an inventor and a member of the G.P. Putnam publishing firm. In 1864, he became famous after publishing Our Burden And Our Strength, a widely read economic work. In the late 1860s, he turned his attention to taxes, and printed The Reports Of The Special Commissioner Of The Revenue. He was later made the chairman of the New York state tax commission, and continued to publish many tax works. ALS. 2pp. 5" x 8". Jany 8. Norwich, Conn. An autograph letter signed "David A. Wells" to the "Hon. Lucius Hopkins": "Will you be so kind as to send me a pamphlet copy of your report and also the report of the State Assessors to which you refer. I like very much what you say - except your inclination to the Old Paganism of taxing personal property. This to some... that never has been done & never can be done: and every year creates new difficulties. I trust you would find time to look at an article I have in the January number of the Atlantic Monthly reviewing the recent decisions of the U.S. Courts in reference to the taxation of negotiable instruments, State, City & railroad bonds. As soon as the facts there referred to become known. Not one dollar of such property can be reached by local assessment. Why they should be struggle to keep up a system that is certain to prove unsatisfactory." The letter is in fine condition overall with dark ink (Inventory #: 362)
$150.00 add to cart Available from
Stuart Lutz, Historic Documents, Inc.
Share this item