Frances Granger, Running for New York Lieutenant Governor In 1828, Writes to Congressman Stephen Van Renssalaer About State and National Politics: "I Am Not Too Sanguine When Say That the Administration Is Gaining Ground Throughout the State... Fear That Some Eastern Manufacturers Are Likely to Opposed the Tariff Bill... We Have Just Received Precious Morsel from the South Carolina Legislature, Upon Proposed Amendments to the Constitution" 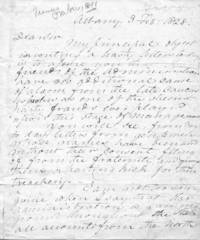 signed
by FRANCES GRANGER
An autograph letter signed "Fr. Granger" addressed to Congressman Stephen van Renssalaer. In this year, Granger, who was then a state congressman, was running for Lieutenant Governor. He wrote: "My principal object in writing a hasty letter today is to assure you that the friends of the administration have no additional cause of alarm from the last caucus which as one of the sheerest party frauds ever played upon the stage of management. You will see, from day to day, letters from gentlemen whose names have been used without their consent filing off from the fraternity, and giving them a parting kick for their treachery. I am not too sanguine when I say that the administration is gaining ground throughout the State, all accounts from the North & west are of a character most flattering. In a few days a notice will be given for an administration State Convention, & every means will now be taken to rouse & help up the indignation which has been started by Bogardus resolutions and while he kept up by this legislation with he kept up this legislative nomination for President - a course which has not been pursued since 1812 & which was not then or since satisfactory to the State. By letters from Boston I fear that some Eastern Manufacturers are likely to opposed the tariff bill should such an one be offered, as may not meet their views. This should be avoided by all means. It will have a protracting influence upon us, should their [sic] be aportioned [sic] the administration men found voting against the bill. After softening down our second resolution we had to swallow it to avoid being forced into an opposition which would have been alike unavailing & minous [sic]. We have just received a precious morsel from the South Carolina legislature, upon proposed amendments to the Constitution. We mean if possible to bring them upon debate, in such manner as to show the people of this State under whose banner they are attempted to be enlisted. In greatest haste, Respectfully yrs. Fr. Granger". (Inventory #: 117)
$150.00 add to cart Available from
Stuart Lutz, Historic Documents, Inc.
Share this item