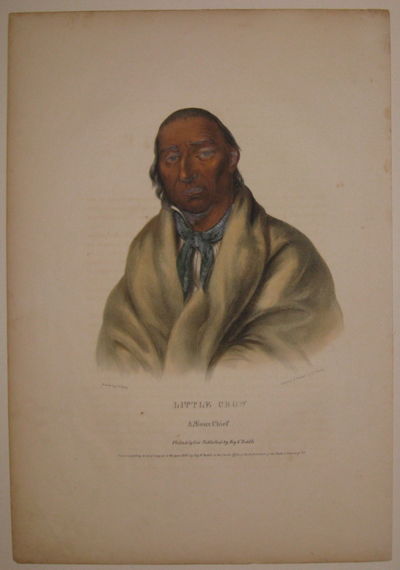 by MCKENNEY, Thomas L. & HALL, James
Philadelphia: Key & Biddle, 1836. unbound. very good. Lehman and Duval. Portrait. Lithograph with original hand coloring. Page measures 20" x 13.75". Beautiful portrait from the folio edition of McKenney and Hall's "History of the Indian Tribes of North America". As Superintendent of the Indian Trade Bureau, Thomas McKenney wanted to document the rapidly disappearing culture of the American natives. He activated the project, sponsored by the War Department, by commissioning writer James Hall and Charles Bird King, a renowned American portraitist. King painted the prominent Indians while they visited Washington D.C. as treaty delegates. Most of the original oil paintings were destroyed by fire in the Smithsonian Museum in 1865. These lithographs, published 1842-58, are all that remain and are still hailed as one of the best visual records of influential Native Americans of the nineteenth century. Little Crow was one of the chiefs of the Sioux tribe in Minnesota. His grandson, also Little Crow, led his warriors in the outbreak in Minnesota in 1862. One of many Native American portraits in our collection. Minor aging along edges, light scattered foxing. A few small tears. (Inventory #: 213652)
$450.00 add to cart or Buy Direct from
Argosy Book Store
Share this item

New York : Stone and Clark , 1840
(click for more details about Map of the State of New York and the Surrounding Country)