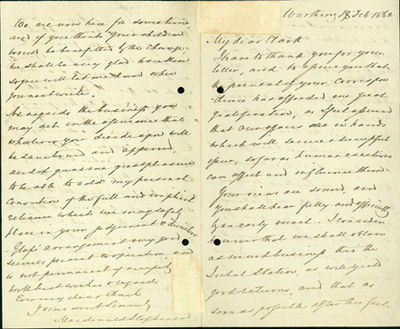 by Stephenson, Rowland Macdonald
1862. Very Good. Stephenson, [Rowland] Macdonald. A.L.s. to Latimer Clark. Worthing, February 18, 1862. 4pp. 219 x 134 mm. Small holes punched in left margin, minimally affecting text, traces of former mounting. Provenance: Latimer Clark. Stephenson was the outstanding pioneer of railways in India, founding the Calcutta-Delhi line and setting up the plan for a national Indian railway network. He later became involved in similar efforts to establish international telegraph communication in India. In the early 1860s Stephenson, Latimer Clark and Charles T. Bright attempted to revive the failed Red Sea and India Telegraph Company, founded in 1858 for the purpose of connecting India and London by undersea cable; the company's cable never worked properly, however, and by 1861 the RSITC had abandoned the project. Stephenson's letter to Clark discusses this Anglo-Indian venture; in it Stephenson speculates that "we shall obtain as much business thro' the Jubal Station, as will yield good returns," and advocates laying new cable instead of trying to repair the existing line. As it turned out, Stephenson and Clark were unsuccessful in their efforts, and the India-to-London telegraph connection had to wait until the laying of the Karachi - Bushire Cable in 1864. Origins of Cyberspace 202. . (Inventory #: 40729)
$275.00 add to cart or Buy Direct from
Jeremy Norman & Co.
Share this item
Jeremy Norman & Co., Inc.
Offered by