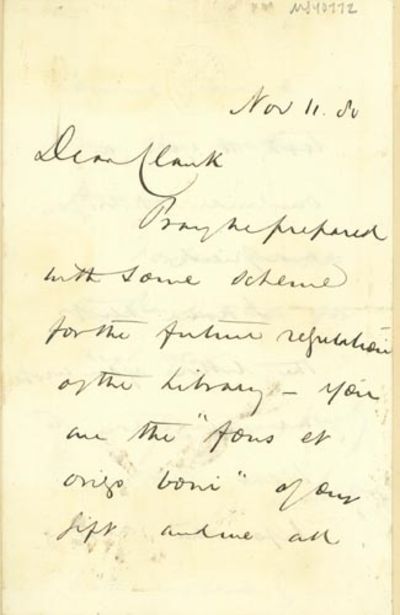 by Preece, William Henry
1880. Very Good. Preece, William Henry (1834-1913). A.L.s. to Latimer Clark. N.p., November 11, 1880. 3pp. 182 x 114 mm. Remains of mounting present. Provenance: Latimer Clark. Preece began his career as a civil engineer under Latimer Clark's older brother Edwin, then worked for both the Electric and International and Channel Islands telegraph companies. In 1870, after Britain's telegraph lines were nationalized and placed under the control of the Post Office, Preece joined the Post Office as a divisional engineer, eventually rising to the position of engineer-in-chief. He introduced Bell's telephone to England in 1876, and helped to sponsor Marconi's researches into wireless telegraphy. Preece's letter, which touches on Clark's book-collecting activities, reads: "Pray be prepared with some scheme for the future regulation of the Library--you are the 'fons et origo boni' of our gift and we all look to you as our guide philosopher and friend. "I have sent the letter you wrote me yesterday to Webb to bring before the next Council so as to bring the matter forward. "Foster accepts the Presidentship for next year." Origins of Cyberspace 180. . (Inventory #: 40772)
$275.00 add to cart or Buy Direct from
Jeremy Norman & Co.
Share this item
Jeremy Norman & Co., Inc.
Offered by