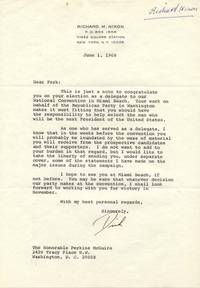 signed
by RICHARD NIXON
TLS. 1pg. 7 ¼” x 10”. June 1, 1968. New York, NY. A typed letter signed “Dick” to E. Perkins McGuire, affectionately referred to as “Perk:” “This is just a note to congratulate you on your election as a delegate to our National Convention in Miami Beach. Your work on behalf of the Republican Party in Washington makes it most fitting that you should have the responsibility to help select the man who will be the next President of the United States. As one who has served as a delegate, I know that in the weeks before the convention you will probably be inundated by the mass material you will receive from the prospective candidates and their supporters. I do not want to add to your burden in that regard, but I would like to take the liberty of sending you, under separate cover, some of the statements I have made on the major issues during the campaign. I hope to see you at Miami Beach, if not before. You may be sure that whatever decision our party makes at the convention, I shall look forward to working with you for victory in November.” Perkins served as the Assistant Secretary of Defense under President Eisenhower, and was appointed by Nixon to be Chairman of the Commission on Government Procurement. As inferred by the letter, the 1968 Republican National Convention was held August 5-August 8 at the Miami Beach Convention Center in Florida, at which time Nixon was selected to be the Republican nominee. He would go on to become President of the United States. Typed on Nixon’s personal letterhead, the letter is in fine condition, with some staining at the top. (Inventory #: 2201)
$300.00 add to cart Available from
Stuart Lutz, Historic Documents, Inc.
Share this item