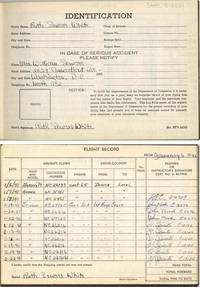 by (AVIATRIX LOG)
9pg. 7 ½" x 5 ¼". January-June 1941. Denver, Van Nuys, CA, and East Haven, CT. A pilot training flight logbook for "Ruth Powers White", also known as "Mrs. William Powers" of Washington, D.C. In the log, Mrs. Powers accrues 22 hours and 35 minutes of total flight time. The log records detailed information on her various aircraft and flight locations. She and her instructors made brief remarks on her progress. Mrs. Powers completed her first solo flight on March 27, 1941. The log is blank after an entry for June 24, 1941. The log also contains a loose sheet of paper with descriptions of flight hand signals. It is in pristine condition, and is a remarkable register of one woman's efforts 38 years after the birth of flight (Inventory #: 927)
$150.00 add to cart Available from
Stuart Lutz, Historic Documents, Inc.
Share this item