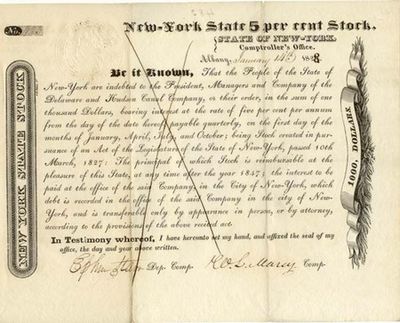 signed
by WILLIAM L. MARCY
(1786-1857). Marcy was Secretary of State and War, comptroller of New York, New York Governor and Senator. DS. 1pg. 7 ½" x 12 ¼". January 14, 1828. Albany. A bond signed "W.L. Marcy" as New York State Comptroller. It reads: "New York State 5 per cent Stock. State of New York Comptroller's Office... Be it Known, That the People of the State of New-York are indebted to the President, Managers and Company of the Delaware and Hudson Canal Company, or their order, in the sum of one thousand dollars, bearing interest at the rate of five per cent per annum... In Testimony whereof, I have hereunto set my hand and affixed the seal of my office, the day and year above written. W. L. Marcy. Comp." The certificate has two vertical folds that do not affect the quality of the signature. The certificate also bears a large "X" in ink between the two folds, which, it is assumed, means the debt was fulfilled. Luckily, this mark ends just above the Marcy signature, leaving it untouched. The complete New York State Comptroller's office seal is visible on the upper left part of the certificate (Inventory #: 850)
$150.00 add to cart Available from
Stuart Lutz, Historic Documents, Inc.
Share this item