CONNECTICUT SENATOR JOHN NILES COMMENTS ON HENRY CLAY, THE TARIFF AND THE WHIGS 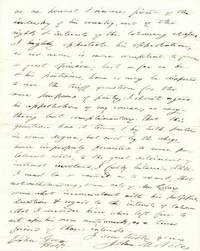 signed
by JOHN NILES
An autograph letter signed “John Niles” as United States Senator concerning Whig politics and the tariff: “…In regard to the compliment from Mr. [Henry] Clay in relation to my course on the tariff out of ’46, I do, as you suppose, appreciate it ‘according to the source’ from a distance of course. So far as regard to Mr. Clay, as one honest & sincere friend of the industry of his country, and of the rights & interest of the labouring class, I highly appreciate his approbation, as no man is more confident to form a just opinion; but so far as he & and his positions, have or may be disposed to use the tariff question for the mere purposes of party, I should regard is approbation of my course, as anything but complementary…this question has at times, & by both parties in some degree, but mostly by the Whigs, being imperfectly presented to mere political ends, to the great detriment of interest involved, I fully believe. Still I must be so candid as to admit, that notwithstanding some acts of Mr. Clay some what inconsistent with his possessed devotion & regard to the interest of labor, that I consider him, when left free to act upon his own sentiments, a true friend of those interests.” Niles hoped that adding a sub-Treasury to the government would protect the interest of the laborers; this made him extremely unpopular among the Whigs and Henry clay, the leader of the party. Niles was so protectionist that he barely support the Mexican War. The letter is in very fine condition with dark ink and white paper. (Inventory #: 162)
$100.00 add to cart Available from
Stuart Lutz, Historic Documents, Inc.
Share this item