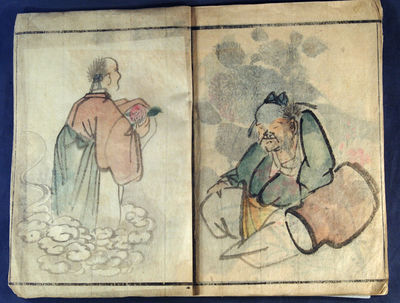 by [EHON MANUSCRIPT]
18. [EHON MANUSCRIPT] SHIJÔ SCHOOL ALBUM. Fukuro-toji style string-bound album, 26.5 x 19.3 cm, consisting of 14 double page and 12 single page color images painted in a skillful Shijô manner, apparently a product of the mid-19th century. The majority of the images are of figures, with a significant minority of bird and flower studies. This work is very problematical: the cover once had a paper label, it is gone, but in its place, someone has brushed in faintly "Kakinuma Kohei Kaichô" [The Pictorial Notebook of Kakinuma Kohei]. We have been unable to unearth any reference to a Kakinuma Kohei. In addition there are various kanbun-style poetical utterances on the backcover. However, it would seem that the covers have been added later, as the first and last paintings are both worn and soiled, as if they had been the outside covers themselves for a long time. Thus the inscriptions and the cover title are probably not contemporary with the work itself and may be of doubtful accuracy. In any case, the work is obviously done in the style of a printed "gafu", right down to the square-ruled sumi borders. Whether it was meant to be a "gakô" or painted preliminary from which an actual book was to be designed or whether it was a sketchbook done in the spirit of a printed work, the images are well designed and executed: the composition and brushwork are quite competent. More importantly, there is resident in almost every painting all the high energy and high spirits of mid-19th century Shijô at its best. As regards the temptation to call this work a skillful copy from an existent published gafu, none of the images seem to have appeared elsewhere. We cannot point to any work from which they could have been copied and neither can any other expert we have consulted. As for the question of "Kakinuma Kohei"'s identity or whether he was even the painter, there may never be a satisfactory answer. The album is lovely and, ultimately, may well prove enigmatic. (Inventory #: 33224)
$2,250.00 add to cart Available from
Boston Book Company
Share this item