Original Drawing for Tornado Alley [For a Book by William Burroughs] 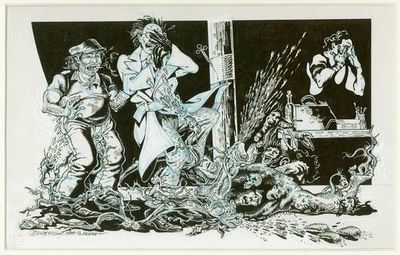 by (BURROUGHS, William). WILSON, S. Clay
1988. An original drawing by Wilson for Burroughs' 1989 book Tornado Alley. This image was included in the exhibition "Ports of Entry: William Burroughs and the Arts" that was mounted by the Los Angeles County Museum of Art in 1996, and it is reproduced on page 140 of the exhibition catalog. Interestingly, the illustration in the book does not show some of the work that Wilson did, as it was done using nonrepro blue pencil which does not show up when photographed: Wilson's edits didn't appear in Tornado Alley and they don't appear in Ports of Entry, but they are quite visible in the work itself. Wilson, one of the great artists of the underground comix of the 1960s and beyond, whom R. Crumb has said was a major influence on Crumb's own work, collaborated with Burroughs on a number of projects. This is not only a significant work of art, and a significant association with Burroughs, but it is also signed by Wilson, who has added, "To Nelson" next to his signature: Wilson gave this work to his friend Nelson Lyon, who loaned it to the exhibition and is listed in the book as one of the lenders to the exhibit. This is, in effect, a three-way association: Nelson Lyon was the co-producer of Burroughs' Dead City Radio, a 1990 album of Burroughs reading his work (including pieces from Tornado Alley) against a background of experimental music by various artists. 9-3/4" x 6-3/4". Matted and framed. Fine. A notable association copy, and an artifact of one of the great collaborations that Burroughs engaged in. No Binding. Fine. (Inventory #: 028091)
$7,500.00 add to cart Available from
Ken Lopez - Bookseller
Share this item