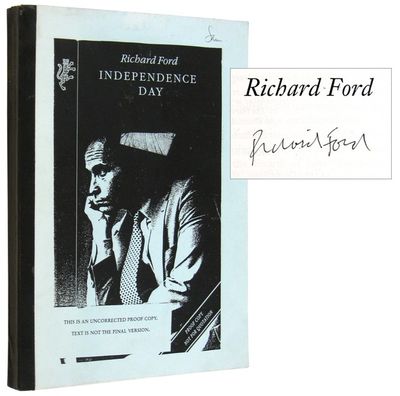 by FORD, Richard
London: Harvill. (1995). An advance copy of the first British edition of Ford's Pulitzer Prize- and PEN/Faulkner Award-winning novel, with printed text on the front cover that indicates that the "text is not the final version," and, in fact, this text does seem to be an earlier state than that of not only the British trade edition but the U.S. edition as well. The text does seem to match that of the British advance reading copy. Approximately 8-3/8" x 11-3/4" tapebound sheets in printed cardstock covers. Signed by Ford. Photoreproduced name on the front cover; dusty rear cover; else fine. An uncommon view of an earlier state of the text of the second book in his Frank Bascombe series, which now runs to four volumes. The photocopied name on the front cover, together with the style of binding, give an indication that the proof was likely one of a very small number, hand-produced by the publisher in-house rather than printed and bound by a full-fledged printer, which would have been done in larger quantities. Unless otherwise noted, our first editions are first printings. First Edition. Softcover. Near Fine. (Inventory #: 911204)
$1,000.00 add to cart Available from
Ken Lopez - Bookseller
Share this item