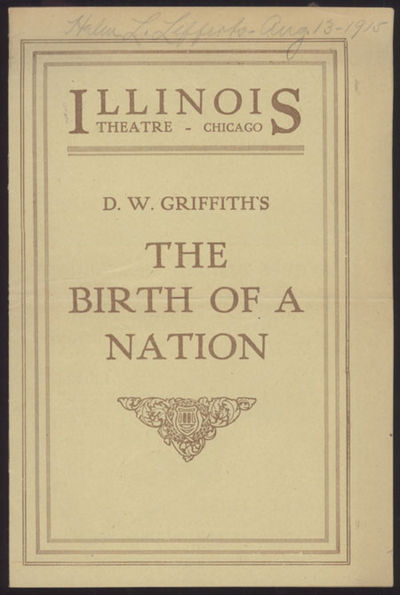 by (Birth of a Nation, The) Griffith, David Wark
Chicago: Illinois Theatre, 1915. Octavo, pp. 1-16 (unpaginated), illustrations, self-wrappers, stapled. First edition. Souvenir program includes a photographic portrait of Griffith, a cast of characters and three pages of text: "A Nation is Born," "The Play's Message of Peace" and "Facts about the Pictures," the latter an account of how the film was made with some technical information. The controversial, now classic film (originally called "The Clansman") was released earlier in 1915 in Los Angeles and New York. The Chicago premiere was delayed and contested until the late summer of 1915 and the Illinois Theatre (later renamed the Biograph) was the site of notable public protests against the perceived racism of the film. Horizontal crease where folded, a very good copy. Together with a very good copy of a contemporary Grosset & Dunlap reprint edition of THE CLANSMAN by Thomas Dixon, Jr., the novel that inspired Griffith's film (along with Dixon's THE LEOPARD'S SPOTS). The program is signed and dated August 13, 1915. The book has a gift inscription to owner of the program, inscribed on front free endpaper "to remind her of Friday, Aug. 13th, 1915, 'The Birth of a Nation.' (Inventory #: 129280)
$300.00 add to cart or Buy Direct from L.W. Currey
Share this item
L.W. Currey Inc.
Offered by

SHEYKH HASSAN: THE SPIRITUALIST. A VIEW OF THE SUPERNATURAL

London : W. H. Allen & Co. , 1888
(click for more details about SHEYKH HASSAN: THE SPIRITUALIST. A VIEW OF THE SUPERNATURAL)
View all from this seller>