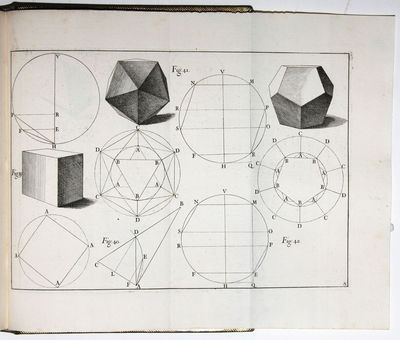 by ZANOTTI, Eustachio
Bologna: Lelio dalla Volpe, 1766. * DSB XIV.589; Riccardi II.654-5: “raro e pregiato” (erroneously calls for only 10 plates); Cicognara 874; Gamba 2508; Vagnetti, pp. 456-57. First edition and internally a fine, untrimmed copy of this general treatise on perspective by the astronomer and mathematician Eustachio Zanotti. “Eustachio Zanotti’s treatise, as would be expected from a scientist of his quality, provides an analytical treatment of the mathematics of perspective at a highly professional level... He is aware that the science of geometrical perspective cannot be regarded as a precise matching of visual experience, and he recommends the avoidance of doctrinaire effects of foreshortening in large scale schemes to be viewed from various angles, but his ultimate recommendation is that the painter can best evoke reality by following the established rules with care and consistency” (Kemp, Science of Art, 141-42).Zanotti (1709-1782) was the son of the painter and Academician Giampietro Zanotti, and a member of the circle of highly cultivated Newtonian scientists working in northern Italy centering around Francesco Algarotti. Professor of astronomy at the University of Bologna, he discovered a number of comets, was a pioneer in the study of variable stars, and wrote a classic work on hydraulics. The treatise on perspective was reprinted in 1825. (Inventory #: 2788)
$2,000.00 add to cart Available from Martayan Lan
Share this item
Martayan Lan, Inc.
Offered by