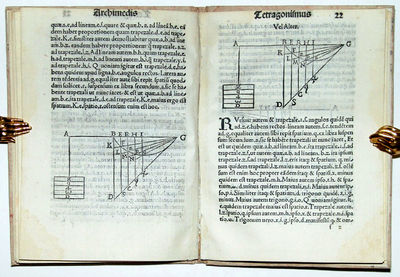 
First published Latin edition of De Mensura Circuli and De Quadratura Parabolae, containing Archimedes’ application of the method of exhaustion (the early form of integration) and the earliest theoretical calculation of π; apart from Valla’s excerpts of 1501 in his encyclopedia, the first printed Latin texts of Archimedes (Rose, p. 50).

The brief treatise On the Measurement of the Circle contains "one of the most popular results of [Archimedes’s] mathematical investigations" (Dijsterhuis, p. 222).  Archimedes calculated the ratio between the circumference and the diameter of a circle (not called π until early modern times) as being less than 3-1/7 and greater than 3-10/71. The average of these two bounds is 3.1418, an error of about 0.0002. Archimedes obtained his sophisticated estimate for π by circumscribing and inscribing a circle with regular polygons having 96 sides.

"In the course of this proof [of π] Archimedes showed that he had an accurate method of approximating the roots of large numbers.  It is also of interest that he there gave an approximation for √3, namely 1351/780 > √3 > 265/153.  How he computed this has been much disputed." (DSB I.222)  All of his calculations were obtained using not algebraic or trigonometrical notation but purely geometrical means, and without decimal notation. De Mensura Circuli, which is devoid of all traces of the Siculo-Dorian dialect in which it would have been written, consists of only three propositions, and those are somewhat carelessly argued. It has been suggested that it originally formed part of a longer work that would have dealt with the more general question as to the ratio between the length of an arc of a circle and that of its chord  (cf Favaro ap. Dijksterhuis, ibid.).

Of the surviving Archimedean works, De Quadratura Parabolae is believed to have been written second.  In it, Archimedes employed statical procedures in the solution of geometrical problems and the demonstration of theorems (DSB, II.219). He demonstrated the quadrature of the parabola (as it would later become known) by purely geometric methods, and found the area of a segment of a parabola cut off by any chord.  The tract opens with five propositions on properties of the orthotome, followed by eight propositions in which equalities and inequalities about plane figures suspended on a balance are enunciated (Dijksterhuis, p. 336).

Throughout the later Middle Ages, manuscript copies of Archimedes’ works had circulated in both Greek and Arabic.  Towards the end of the 15th century, the Italian humanist Giorgio Valla  had plans to prepare a complete Latin edition of 7 works contained in the manuscript known as Codex A, which was in his possession.  However, he died before accomplishing this, and only a few fragments from Archimedes were incorporated into his encyclopedic De Expetendis et Fugiendis Rebus Opus, which appeared posthumously in Venice, in 1501.  Tartaglia’s 1543 Opera Archimedis contains reprints of De Mensura Circuli and De Quadratura Parabolae from Gaurico’s 1503 edition.

Gaurico based his translations of De Mensura Circuli and De Quadratura Parabolae on a manuscript of Moerbeke’s 1269 translation (Madrid MS 9119).  Gaurico (1476-1588) reportedly took a doctorate in arts at Padua in 1502 and the preface to the Tetragonismus is dated from Padua, 1503.  He went on to publish an edition of Pecham’s Perspectiva Communis, and Trapezuntius’ translation of the Almagest (Venice, 1528).  Gaurico’s contemporary reputation stemmed from his astrological prognostications, for which he earned a bishopric from Paul III. Rose suggests that Gaurico may have met Copernicus at Padua, as they were both at the university in the early years of the 16th century, and would have shared a common interest in Ptolemy and Archimedes (Rose, p. 120).