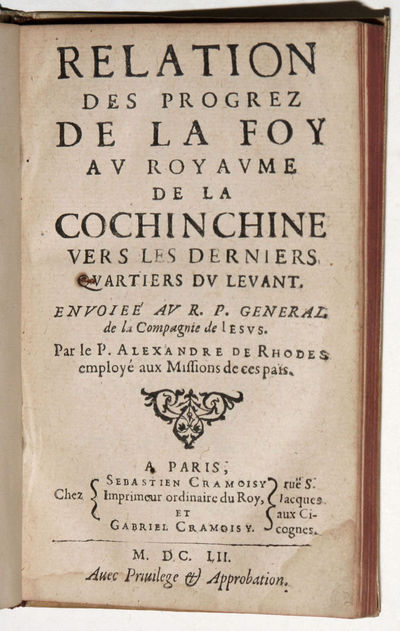 by RHODES, Alexandre de
Paris: Sebastien et Gabriel Cramoisy, 1652. * De Backer/Sommervogel VI.1719.5; Brunet V.1269 (also mentions Italian ed.); Cordier, Indosinica, 1619; Stephen Neill, History of Christian Missions (1982), pp. 195-6.. First French edition of this first-hand account of 17th-century Vietnam (first Italian ed. 1650), which played an important role in fostering French interest in the region. Rhodes, who earned the favorable opinion of Louis XIV, is often heralded as the founder of Vietnamese Christianity, and remembered for his important dictionary of Latinized Vietnamese. The Relation was written from Macao in 1645, and published in Italian when Rhodes returned to Rome in 1650. “Part I of Rhodes’s relation provides A VALUABLE ETHNOHISTORY OF TONGKING; Part II relates the history of the Jesuit mission there. Rhodes also published an Annamite-Latin-Portuguese dictionary, presumably for the use of his successors in Vietnam, and a Latin-Annamite catechism for the converts… HIS PUBLISHED WORKS WERE TO BECOME FOUNDATION STONES FOR THE MISSION EDIFICE OF INDOCHINA ERECTED DURING THE LATTER HALF OF THE 17TH CENTURY” (Lach, III.1.381).Throughout his sojourn in Rome, Rhodes campaigned to his superiors about the need to dispatch capable bishops to Indochina. He felt strongly that the order’s future lay not in China, but in Indochina, where the mission could be expanded with the aid of a faithful native clergy. In 1652 Pope Innocent X sent Rhodes to Paris to recruit suitable personnel. “Here he found enthusiasm and financial support for a new mission under French leadership in court circles, in the Assembly of the Clergy of France, and among the French Jesuits… After the Fronde, the young Louis XIV became interested in the travels of his subjects overseas, and looked favorably upon Rhodes’s activities” (Lach, p. 408) Alexandre de Rhodes (1591-1660) was born in Avignon, entered the novitiate in Rome, was ordained in 1618 and shortly thereafter went on his first mission. Originally destined for Japan, he arrived at Macao in 1623, and was then sent instead to southern Vietnam, where he managed to preach to the indigenous people in their own language after only six months. His initial visit was curtailed when the missionaries were expelled in 1625 and his next mission was to northern Vietnam in 1627. Eventually, the animosity of the local ruler led to the ejection of all the missionaries, and in 1630, Rhodes was back in Macao, where he taught theology for ten years and baptized 6700 converts. He managed to go back to Cochinchina from 1640 to 1645, before being permanently banished. Rhodes returned to Rome in 1645, bringing with him a Chinese convert from Macao. He published this Relazione De’ felici successi della Santa Fede predicata da’ Padri della Compagnia di Giesv nel regno di Tvnchino (Rome, Luna, 1650; 4to. with a folding map). A second Italian edition appeared in Milan in 1651. The work was then condensed and translated into French by Henry Albi, S.J. with an introduction by Father Jacques de Machault in 1652. This edition was dedicated to Marie-Eléonore de Rohan de Montbazon, abbess of Trinité de Caen (d. 1682). A Latin translation, Tvnchinensis historiae libri duo… 1627-46, was published in Lyons by J. B. Devenet the same year. OCLC lists one copy at NYPL; copies at Nat’l Library of Canada, BL and BNF. (Inventory #: 3475)
$10,500.00 add to cart Available from Martayan Lan
Share this item
Martayan Lan, Inc.
Offered by