A declaration of the demeanor and carriage of Sir Walter Raleigh, knight, as well his voyage, as in, and sithence his Returne; and of the true motives and inducements which occasioned His Maiestie to proceed in doing iustice upon him, as hath bene done 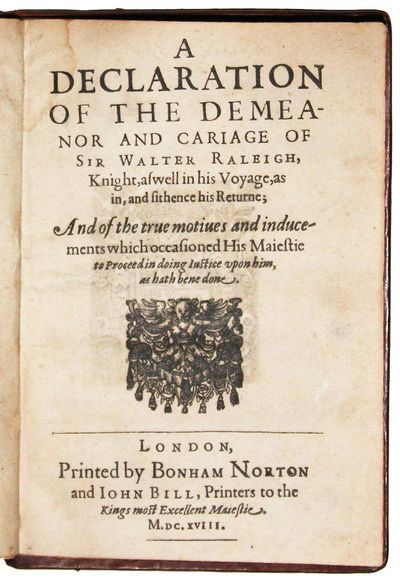 by [RALEIGH, Walter, Sir] / [BACON, Francis]
London: Bonham Norton and John Bill, 1618. Rare first edition, first issue, of the defense of James Is execution of Sir Walter Raleigh, written by Francis Bacon and with (according to Bacon) very material additions by the king himself. The work describes the circumstances surrounding Raleighs final voyage to America in 1618 with the purpose of locating a fabled gold mine, and includes the text of Raleighs commission. In the event, his expedition ended up seizing the island of St. Thomas and killing its Spanish governor, an ostensible act of war against Englands ally. Back in England, Raleigh, who had already been sentenced to death in 1603 on another conviction, was tried by a commission headed by Bacon and executed in October 1618. The English public was appalled: To sacrifice to a concealed enemy of England the life of the only man in the nation who had a high reputation for valor and military experience was regarded as meanness and indiscretion, and the intimate connections which the king was now entering into with Spain, being universally distasteful, rendered this proof of his complaisance still more invidious and unpopular (David Hume, History of England). The present volume is the governments hasty attempt to justify the execution. Bacon, as a member of the council that had sentenced Raleigh, appears to have been the main author. In a letter to a friend he mentioned the work and the kings input: We have put the Declaration touching Raleigh to press, with his Majestys additions which were very material and fit to proceed from his Majesty (cf. Pforzheimer, 819). The work is known in at least two issues, a first issue of 63 pages and a second of 68. STC and Pforzheimer originally took the present to be the second issue, but the STC has since revised its opinion based on the research by Starkey, published in his Library article of 1948. * STC 2nd ed. 20652.5; Gibson, Francis Bacon 369c; Starkey, The printing of a declaration of the demeanor and carriage of Sir Walter Raleigh 1618, The Library (5th series) 3 (1948), 124-34.. 4to. [16.6 x 11.4 cm], (4), 63, (1) pp., including initial blank signed A in a woodcut tailpiece. Bound in later paneled calf, title stamped on spine, lower portion of spine damaged, slightly worn at extremities. [INTERNAL CONDITION] Generally very good. (Inventory #: 3463)
$4,500.00 add to cart Available from Martayan Lan
Share this item
Martayan Lan, Inc.
Offered by