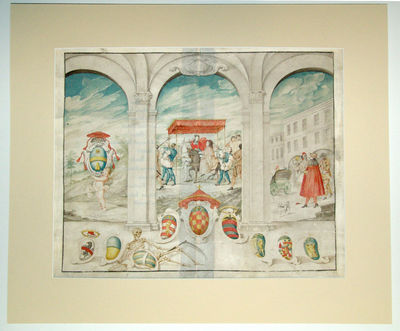 by [ANONYMOUS DRAWING, attributed to Francesco di Giovanni in graphite on verso.] [DANCE OF DEATH]
1750. * DBI s.v. Albani; G. Cucco, ed., Papa Albani e le arti a Urbino e a Roma, 1700-1721 (2001).. Highly finished preparatory design for a fresco or tapestry connected to the Albani family, whose coat of arms appears under the left-hand arch crowned with a cardinal’s hat. Under the central arch of the drawing, preceded by a palafreniero, four servants in blue and white livery carry a red baldacchino that covers two figures processing on horseback. One is clearly a secular prince, with his garland crown and red cape, while the other figure is a cardinal wearing a black hat and a red robe. It is possible that the cardinal depicted is either Annibale (1682-1751) or Alessandro (1692-1779) Albani, or their nephew Cardinal Giovan Francesco Albani II (1720-1803). Under the right arch of the fictive architecture, two buildings appear. While three commedia dell’arte figures, who are commonly associated with the Venetian carnevale, appear, the carriage in the background contradicts the possibility that the setting for this event is Venice. Below these three arches, a series of nine crests appear. The personification of death reclines with his scythe behind the coat of arms of the Corsini family (blue and yellow diagonal stripes with a white band through the center). The crown, which signified the rank of the family, has been wrenched off. (The Corsini were made dukes by Urban VIII in the seventeenth century and princes by Clement XII in 1730) This act of vandalism fits well within the long history of enmity between the Corsini and Albani families in the papal court. We have been unable to connect the sheet to a specific project at any Albani residence, but future research should consider the Villa Castelbarco Albani in Vaprio d’Adda, northeast of Milan, whose documentation has proved difficult to obtain. (Inventory #: 3115)
$15,000.00 add to cart Available from Martayan Lan
Share this item
Martayan Lan, Inc.
Offered by