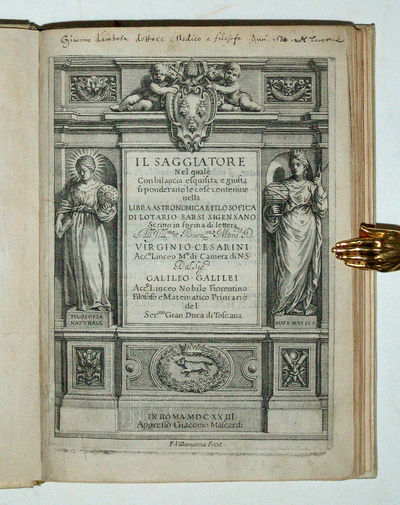 by GALILEI, Galileo
Rome: Giacomo Mascardi, 1623. First edition, first issue of an outstanding document in the history of science. The work grew out of the appearance of three comets in the autumn of 1618 and articulate the principal arguments of whether they were atmospheric or celestial phenomena. More importantly, Il Saggiatore is intimately connected with, if indeed it did not originate, the rift between Galileo and the Jesuits which ultimately saw the astronomer imprisoned by the Inquisition after the publication of the Dialogo in 1632. Il Saggiatore is often called Galileo’s “scientific manifesto,” and is certainly one of the most celebrated polemics in the history of physical science. It is the first of Galileo’s works written after the Inquisiton’s warning not to propound or defend the Copernican theory, which of course he does, albeit in covert form. The engraved illustrations in Il Saggiatore include some of the earliest published of the rings of Saturn, Mars in inferior and superior conjunction, and the phases of Venus. The work comes in several issues, of which this is the first, with the short errata list correcting 16 errors.* Cinti 73; Riccardi I.511, 628; De Backer-Sommervogel III.1684-86; L’Accademia dei Lincei e la cultura europea nel XVII secolo, 14 (Grassi), 15 (Galileo) and generally pp. 75ff.; Drake & O'Malley, The Controversy of the Comets of 1618, p. vi.. 4to. [22 x 16.5 cm], (7) ff., including engraved title and portrait of Galileo signed Villamoena, 236 pp. Bound in 19th-century vellum. Excellent. (Inventory #: 3704)
$48,000.00 add to cart Available from Martayan Lan
Share this item
Martayan Lan, Inc.
Offered by