The School of Raphael; or, the Student’s Guide to Expression in Historical Painting. Illustrated by Examples engraved by Duchange, and others, under the inspection of Sir Nicholas Dorigny, from his own Drawings after the most celebrated Heads in the 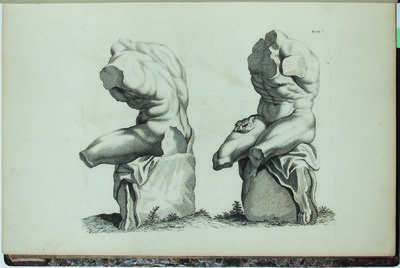 by RALPH, Benjamin/ DORIGNY, Nicolas, ed
London: John Boydell, 1782. Rare, extra-illustrated second edition of an artist’s drawing manual based on the “most celebrated heads” from Raphael’s Sistine Chapel tapestry cartoons, which William and Mary had Sir Christopher Wren install in their own gallery at Hampton Court (later transferred to V & A.) Although eagerly studied by 18th century British artists as the fons et origo of academic art, the cartoons proved controversial with the advent of stronger artistic personalities. It is no accident that Sir Joshua Reynolds published an influential article during in 1759, when the first editionj of the present work appeared. "Eager to find faults in Raphael's Cartoons, Reynolds's "Connoisseur" uses them to air his familiarity with academic rules and modern art theory, citing the "Line of Beauty and Grace", the need for variety, and the virtues of pyramidal design.” (Krysmanski).The School of Raphael’s 102 plates show moods ranging from Affection (in Christ’s Charge to Peter) to Zeal (Elymas the Sorcerer). The volume also includes “THE OUTLINES of each HEAD,” (unnumbered and interleaved with plates 1-45). These Raphael heads were drawn by Nicolas Dorigny, and engraved by the best known reproductive printers of the era.. The book also included “several PLATES of the Most celebrated Antique Statues, Skeletons and Anatomical Figures, Engraved by an Eminent Artist,” (plates I-XII). This copy of The School of Raphael is extra-illustrated with four large-scale engravings of nudes in classical poses and landscapes. They were drawn and engraved by the prolific Bernard Picart (1673-1733), and likely come from a larger volume of anatomy studies (numbers 60, 62-3, 66).The present edition is known to have been in the library of Sir John Soane. OCLC: LoC, UChicago, Art Institute of Chicago, Winterthur, MMA.*Catalogue of the Library of Sir John Soane’s Museum, London, 1878, p 312; Krysmanski, "Benjamin Ralph's School of Raphael (1759): Praise for Hogarth and a Direct Source for Reynolds", British Journal for Eighteenth-Century Studies, 24 (Spring 2001), 15-32.. Folio [42.8 x 28.5 cm], [6], 21, [1] p., XI [i.e. XII], 102 leaves of plates from Dorigny’s drawings after Raphael (45 in outline), 12 on geometry, anatomy and antique sculpture, and four extra-illustrated leaves by B. Picart. Bound in nineteenth-century half calf and marbled boards with leather corners. Rubbing to spine, boards and edges, with a partial library sticker on front pastedown. Very occasional foxing to leaves and plates, a few graphite annotations in margins; order of several plates near end transposed. (Inventory #: 4122)
$6,500.00 add to cart Available from Martayan Lan
Share this item
Martayan Lan, Inc.
Offered by