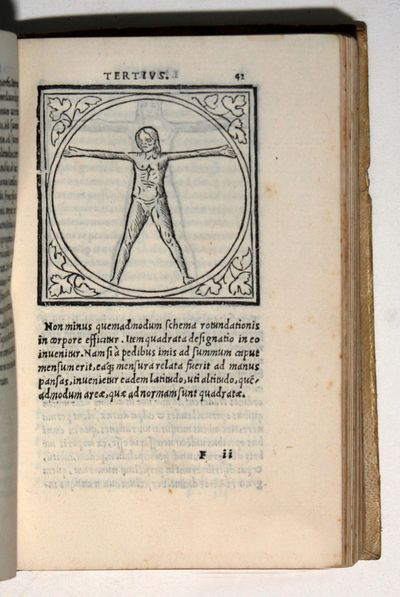 Fine copy of the second edition of the first illustrated Vitruvius (1511), here augmented with additional material. Edited by Fra Giovanni Giocondo, this early 16th century version represents the first attempt to establish a critical text of the only surviving ancient architectural treatise in the Western canon. Appearing in 1513, this second edition is the first pocket edition and is entirely printed in elegant italic. It contains the same woodcut illustrations which appeared in 1511 but here reduced to a handy octavo format, and it adds 4 new woodcuts as well as Frontinus' treatise on acquaducts. A consort of Pietro Bembo and Giovanni Lascaris, Fra Giovanni Giocondo, its editor, was both a practicing architect and a highly regarded philologist. Accordingly, his new edition of Vitruvius' ancient text "has been seen as an attempt to 'manualize' the treatise, converting it into a useful model and pattern book for contemporary architects…" (Millard, p.494). Its program of illustration, of course, was its great breakthrough: early editions of Fra Giocondo's text are significant in the history of architecture for being the point of departure for future graphic illustrations of Vitruvius thoughout the 16th and 17th centuries.
"Fra (Frate) Giovanni Giocondo ( 1433-1515) was one of the most distinguished architectural theorists and practitioners of his time. During his long career he served three kings – Ferrante of Naples, Charles VII, and Louis XII of France – the Venetian republic, and the papacy" (Millard, p. 492) Around the time that this Florentine edition appeared, he was called to Rome to work on St. Peter's with Raphael and Bramante whom he replaced upon the latter's death in 1514. The 1513 Vitruvius was followed by the editions of 1522 and 1523. But, according to Millard, "the 1522 edition was not as faithful to Fra Giocondo, while the 1523 edition was a pirated version published in Lyon." (p. 493). Cicognara considers the 1513 edition the most correct.* Adams V-903; Fowler 394; Wiebenson I-6; Mortimer II.543 (1511). (Inventory #: 1776)
$12,500.00 add to cart Available from Martayan Lan
Share this item
Martayan Lan, Inc.
Offered by