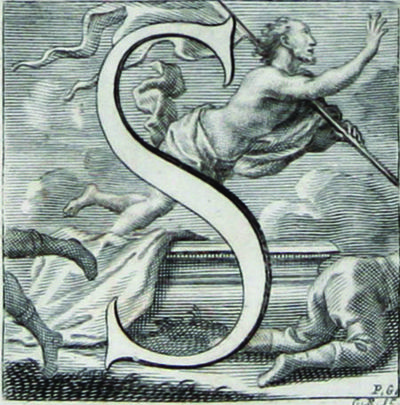 by [GHEZZI, Pier Leone / FREY, Jacob / WESTERHOUT, Arnold van et al.] / GUIDI, Alessandro CLEMENT ALBANI XI
Rome: Francesco Gonzaga, 1712. Extremely rare first edition of this luxuriously illustrated anthology of extracts from papal sermons delivered between 1703-09, in Latin prose and facing Italian verse: an unusual example of Baroque ecclesiastical culture from the pontificate of Clement XI. On the basis of extreme rarity and contents, the volume numbers among those commemorative and honorific volumes which were never sold in the trade, but offered as a ceremonial gift to cardinals, ambassadors, and other important personages—corroborated by the ownership inscription in the present volume by a monsignor during Clement’s papacy. The volume is singular in our experience for its contents. Latin extracts of Clement’s sermons, generally rather brief, are printed on the left side of the page, then freely and somewhat copiously versified in Italian by the poet Guidi. The sparsity of the elegantly printed text leaves positively wasteful margins! Each sermon is preceded by a full-page engraving on the subject of the sermon (the Holy Family adoring the Christ Child for Christmas, the Resurrection for Easter, etc.) designed by Pietro Leone Ghezzi, one of the principal artists in Clement’s retinue, and engraved by Roman engravers generally also associated with Clementine projects (Frey, van Westerhout etc.) The designs were made expressly for the present volume and are echoed, as it were, in a series of initials and vignettes devoted to the same theme; as such, they must have been engraved for the present volume and not simply taken from the printer’s stock. If somewhat overshadowed by Maratti in his lifetime and by his epoch-making role as the first professional caricaturist, Ghezzi (1674-1755) was nonetheless an important painter of religious subjects, who worked on Albani’s most prestigious public projects. The surfaces of Ghezzi’s paintings were considerably less finished than those of Maratti, and he seems more receptive to Venetian color and unfinishedness—thus showing a different aspect of Albani taste. Ghezzi was commissioned in 1712 (the year this book was published) to paint The Election of St. Fabian for the Albani Chapel in S. Sebastiano fuori le Mura. Within the next decade, he helped paint the frescos the ancient basilica of S. Clemente and the nave decoration of St. John Lateran. His portraits, including one of Clement XI, are unusually informal and realistic, possibly due to Ghezzi’s experience at caricature. Alessandro Guidi (1650-1712), who translated the sermons, was a prolific Arcadian poet. OCLC records a single copy (Berkeley), and we locate no additional American copies.. Large 4to. [28 x 20.5 cm], engraved portrait of Clement XI, xvi pp., full-page engraving, 213 pp., including 5 full-page engravings paginated with text. 18th-c. vellum over boards, spine with 5 raised bands and red morocco label, gilt-stamped; covers with large blind-tooled central ornament, blind-tooled filets and ornaments. Short tears at head and foot of spine and a few nicks there. Early inscription on front pastedown mentions Monsignor Bianchini, “Prelato Domestico e Camerario segreto di S. Santita Papa Clem. XI.” Mild finger-soiling in margins of title and a little foxing on some text leaves, but overall a very fine, attractive copy. (Inventory #: 4343)
$3,500.00 add to cart Available from Martayan Lan
Share this item
Martayan Lan, Inc.
Offered by