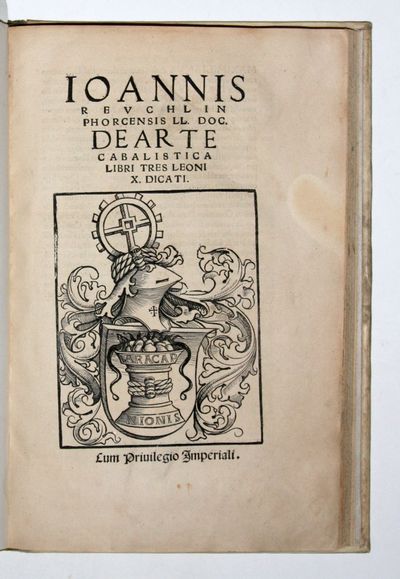 by REUCHLIN, Johannes
Hagenau: Thomas Anselm, 1517. Scarce first edition and fine copy of Reuchlin’s cabalistic studies, ‘la Bible de la Kabbale Chrétienne’ (Secret, Les Kabbales Chrétiennes de la Renaissance, p. 57). "Inspired by the work of Pico della Mirandola, Reuchlin became one of the founders of Christian Kabbalah with the publication of De verbo mirifico (1494) and, more important, De arte cabalistica (1517). The latter work, which is dedicated to Leo X, is a Socratic-style dialogue set in Frankfurt. The interlocutors are Philolaus (a Pythagorean), Marranus (a Muslim), and Simon (a Jew). Simon, an exile of the 1492 Spanish expulsion, teaches the others at great length about the Kabbalah, with particular emphasis on numerology (and its particular compatibility with Pythagorean numerology) and the mysteries of the hidden meaning of Hebrew characters. Reuchlin, however, applies the mysteries to Christianity and, in fact, appropriates the Kabbalah as a source of Christian revelation. At a high point in the work, Philolaus concludes that "all our studies in both [that is, both Pythagoreanism and Kabbalah] lead back to the salvation of mankind… Scholem has identified Reuchlin’s primary source, a medieval miscellany of Kabbalistic texts now in the collection of the Jewish Theological Seminary (Halberstamm 444)" (Hotchkiss/Price, The Reformation of the Bible/The Bible of the Reformation I.20). "In De arte cabalistica, Reuchlin incorporated Pythagorean ideas on number mysticism and metempsychosis; notions which Pythagoras shared with Cabbala and which made him a ‘Greek cabbalist’. Reuchlin describes the Cabbala as an alchimia, internalising external perceptions into images and thoughts and eventually into light. The process of becoming like god is symbolized by the position of Adam Kadmon in the middle of the seraphic tree" (F. van Lamoen, The Hermetic Gnosis. Catalogue of Exhibition in the Bibliotheca Philosophica Hermetica, 37).Reuchlin promoted the study of Greek and is credited with introducing neo-Latin comedy into his native Germany, but it is his pioneering study of Hebrew language and Cabbala—the latter undertaken under the aegis of Pico—which gained him lasting significance. He used his extensive travels to make contacts with other humanists and other Jews and to acquire manuscripts and printed books for his library, one of the most substantial of its time (Contemporaries of Erasmus). * Adams R-381; Proctor 11,685; Benzing (Reuchlin) 99; Caillet 9333; Scholem, Kabbalah, p. 198.. Small folio [29.5 x 18.5 cm], (4), 79 (1) ff., including author’s woodcut arms on title as well as numerous passages of Hebrew and Greek, with several woodcut Cabbalistic figures (LXXXVIII v) A4,B6-N6,O8. Bound in 17th-century stiff vellum, calf title label gilt. Ownership inscription of D. Wyttenbach 1786 on front endleaf. Later purchase inscription from Payne & Foss 1824 10/. Discrete former library stamp on verso of final leaf; early marginalia cropped at time of rebinding. Apart from even toning, fresh, unsophisticated copy, excellent. (Inventory #: 3018)
$15,000.00 add to cart Available from Martayan Lan
Share this item
Martayan Lan, Inc.
Offered by