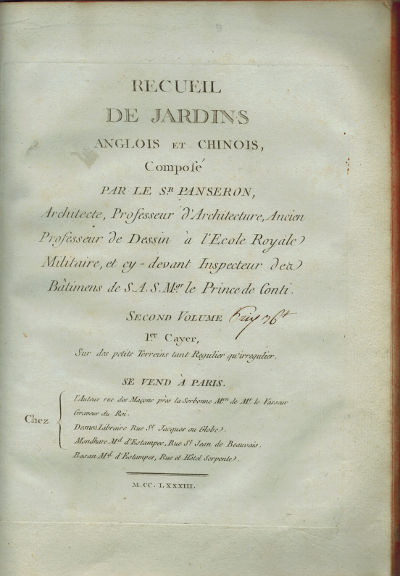 by PANSERON, PIERRE
Paris: Chez l'auteur, 1783. Full Calf. Very Good. 4to (27.0 x 20.5 cm), Contemporary decorative calf with red morocco label. Collation: [6] pp. + 6 [i.e. 5], 6, 6, 10 (folded) plates. The book is bound in a decorative, mottled calf French binding of the period. The spine has raised bands and floral gilt decorations in panels, with red morocco label in upper panel. The ends of spines and corners show some wear. There is worming spot on front cover near fore edge with light scuffing to boards, rubbed corners. All of the plates are hand colored in a fine contemporary hand and paper repair to the folding plates along the gutter. There are some small stains on a few plates near the tab, affecting the borders. The first 6 pages contain 4 engraved pages of text. The twenty-seven (27) engraved plates depict garden designs of English and Chinese style with a scale of garden designs are hand colored. This is the second volume of 4 in a series of works, which include the author's Recueil de jardinage (1783), and, Recueil de jardins. Anglos-chinois (1787). The missing first plate is absent in all extant library copies, indicating it was not bound in all copies, evidenced by an uncolored first plate in the copy of the book in the Bibliotheque Nationale, Paris.

The engraved colored plates in the three "Cayer" of 17 plates are excellent examples of English and Chinese gardens and give detail designs of gardens while the remaining 10 folding plates provide "Dispositions" of gardens with buildings or "Bâtiments" and other garden structures. Panseron was a student of Jacques Francois Blondel, one of France's great architects. Panseron designed and engraved all the plates in this and other works. These plates illustrate his mastery of engraving and beautiful design and coloring to represent the rich and wonderful survey of gardening in France in the second half of the 18th century when English and Chinese gardens were en vogue. Any copy of Panseron's excellent treatise on English and Chinese garden design is very scarce. (Only a few libraries have this 2nd volume and the Institut National d'Histoire de l'art, Collections Jacques Doucet Bibliothèque, Paris has the complete series of 4 volumes) Excellent hand colored engravings of proposed garden designs by Panseron. "During the second half of the eighteenth century, a new paradigm of garden design emerged in France. Form-giving in French gardens had long been guided by rules of measure, proportion and symmetry in keeping with principles of architecture. However, a reaction against those practices began to take shape around the mid-1700s. Many designers abandoned the conventions of regular (i.e., rule-based) design in favor of asymmetrical forms and arrangements with f¬¬eatures such as meandering paths and streams, serpentine water basins, uneven ground surfaces and seemingly haphazard plantings. other approaches to irregular design were actively pursued in late eighteenth-century France, including practices that relied on the plan as a format for generating, organizing or representing design ideas. Exemplary in that regard is the work of Pierre Panseron (born c. 1742), a designer based in Paris during the closing decades of the ancient régime. Panseron came to irregular design through his work teaching architecture. Between the mid-1770s and the late-1790s, he operated an independent school of architecture, drawing and mathematics in Paris. In that context, he produced hundreds of prints for use by his students and for larger markets, including more than 150 images of his own designs for regular and irregular gardens. Significantly, all of the latter were represented exclusively in plan format, contradicting a contemporary claim that plans were insufficient to the task of representing irregular design.Panseron was fully competent in the drawing of perspectives and could easily have represented his ideas in views, but his preference for the plant was informed by his priorities in architectural instruction. At a moment when many designers and critics were discussing irregular design in philosophical terms related to ideals of nature, Panseron approached it as a formal exercise for architects, in keeping with older attitudes about garden design as a province of architecture. Within that framework, he produced an unusual body of designs normally associated with nature, but more pointedly oriented towards the urban context within which he lived and worked, where garden lots were often flat and enclosed by walls. Many of Panseron's schemes exploit tensions between the flatness of the field or representation and the implied volumes of the garden, privileging the former through features best appreciated not in pictures but in plans." (D.L. Hays- Lesson plans: Pierre Panseron and the pedagogy of garden design in late eighteenth-century France. Studies in the History of Gardens & Designed Landscapes: An International Quarterly. Vol. 26, No.4, 2006) (Inventory #: 00008)
$8,000.00 add to cart or Buy Direct from
Antiquariat Botanicum
Share this item
Antiquariat Botanicum
Offered by

All items are offered subject to prior sale. All items are guaranteed as described and can be returned if unsatisfactory within 10 days of receipt and with prior notice. Returned items must be packaged in the manner received, and with tracking information provided. We accept Visa, MasterCard, checks (in U.S.currency) and wire transfers (please contact for details). Shipments on credit card orders will only be to the address of the credit card holder. Advance payment is required for all first time clients, institutions excepted. Minimum ground shipping in continental U.S is $10.00 for the first book and $4.00 for each additional book with larger orders at cost. All International shipping will be by air express at cost unless client requests differently.
More from this seller

A Complete Dictionary of Practical Gardening: comprehending all the Modern Improvements in the Art; whether in the Raising of the Various Esculent Vegetables, or in the Forcing and Managing of different Sorts of Fruits and Plants, and that of Laying out,

London : printed for George Kearsley by R. Taylor and Co , 1807
(click for more details about A Complete Dictionary of Practical Gardening: comprehending all the Modern Improvements in the Art; whether in the Raising of the Various Esculent Vegetables, or in the Forcing and Managing of different Sorts of Fruits and Plants, and that of Laying out,)
View all from this seller>