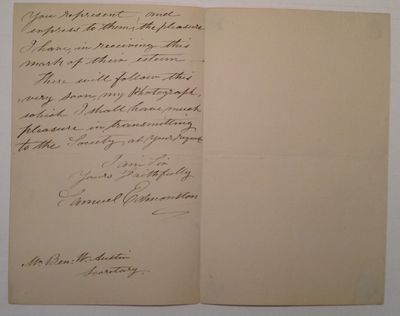 by EDMONDSTON, Samuel
Edinburgh, 1867. unbound. 2 pages, 7 x 4.5 inches, Edinburgh, February 9, 1887, written to noted American autograph collector and historian Ben W. Austin, thanking him for an honorarium. In part: "...The honor of being unanimously elected a member of the N.W. Literary and Historical Society of Sioux City, Iowa...I am very much gratified..." One horizontal fold; otherwise near fine condition. Edmondston was a Scottish born artist. Austin, the recipient of this letter, amassed an incredible collection of autographed material during the later part of the 19th century by claiming he was the secretary of a non-existent historical society. (Inventory #: 213814)
$100.00 add to cart or Buy Direct from
Argosy Book Store
Share this item

New York : Department of Transportation , 1995
(click for more details about Express Bus Map)
View all from this seller>