HISTORY OF THE REBELLIONS IN ENGLAND, SCOTLAND AND IRELAND 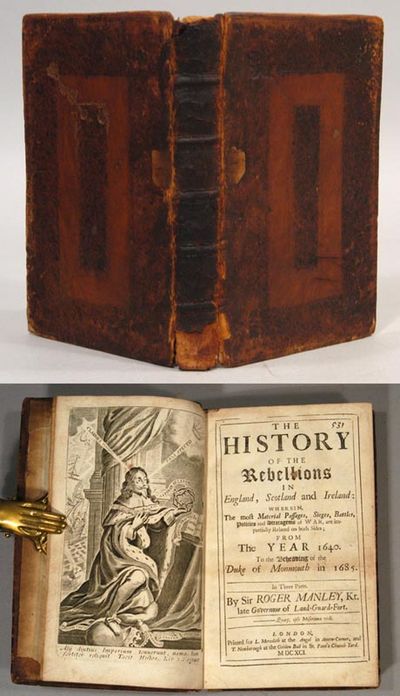 by MANLEY, Roger
1691. MANLEY, Roger. THE HISTORY OF THE REBELLIONS IN ENGLAND, SCOTLAND AND IRELAND: wherein, the most Material Passages, Sieges, Battles, Policies and Stratagems of War, are impartially Related on both Sides; from the Year 1640. to the Beheading of the Duke of Monmouth in 1685. In three parts. London: Printed for L. Meredith at the Angel in Amen-Corner, and T. Newborough at the Golden Ball in St. Paul's-Church-Yard, 1691. First English-language edition (it was originally published in 1686 in Latin with the title 'Commentariorum de Rebellione Anglicana...'), but with a cancel title-leaf on which line 14 of the title has been corrected to read "1685." Frontispiece portrait of Charles I engraved by R. White. Octavo. An incomplete copy lacking text pages 201-208: [16],159,[1],169-200,209-348,[4] pp. The last four pages are publisher's ads. Early ink ownerships on ffep. (Richard Burrow), on first 'Contents' page (Wm. Burrow), and on the last ad page (Wm. Turbutt). In a worn contemporary binding with cracked joints, though the boards are still tenuously attached. The leather has darkened and is dried and scaling in places, with cracked joints. The frontispiece and text leaves are generally clean but for some scattered minor foxing or, occasionally, a small blemish. A scarce title, it is offered as is due to the missing text pages. (Wing M440; Arber's Term Cat. II 346; Graesse IV 366; Lowndes (1871) II 1464). (Inventory #: 85573)
$600.00 add to cart Available from
Boston Book Company
Share this item