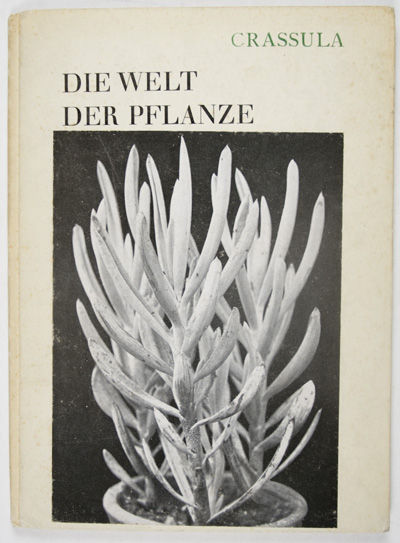 by Fuhrmann, Ernst (editor); Renger-Patzsch (photogr.)
Berlin: Auriga-Verlag, 1928. Later printing. Hardcover. g. Quarto. 56pp. Original paper-covered boards with photo-illustrated paste-down. Profusely illustrated with 41 reproductions of b/w photographs by Albert Renger-Patzsch (including paste-down on front cover), this work is the photographer's first published book. Renger-Patzsch will later become famous for "Die Welt ist Schön." This volume is a general guide to growing and identifying various Crassula plants. The Crassula family is a large genus of succulent plants containing many species, including the popular jade plant, Crassula ovata. They are native to many parts of the globe, but cultivated varieties are almost exclusively from the Eastern Cape of South Africa. Crassulas are usually propagated by stem or leaf cuttings. Most cultivated forms will tolerate some small degree of frost, but extremes of cold or heat will cause them to lose foliage and die. This work was published by Auriga in three different editions which varied in size and cover art. The cover of this volume being in "second state." Some foxing and age-toning to boards. Head and tail of spine slightly bumped. Corners rubbed. Text in German. Binding in overall good, interior in very good condition. (Inventory #: 16716)
$450.00 add to cart or Buy Direct from
Eric Chaim Kline Bookseller
Share this item