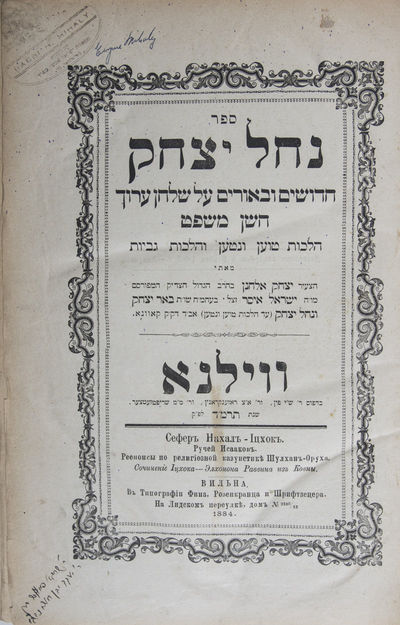 by Spektor, Isaac Elhanan
Vilna: NP, 1884. First edition. Hardcover. vg. Folio. 237 leaves. Half leather over boards with gilt decorated spine. Illustrated title page. Work of responsa on the main work of Halacha, or Jewish Law, the Shulchan Aruch. The "Nachal Yitzchak" is considered authoritative by most Rabbis. Front board starting to hinge. Edges of boards are slightly worn. Faded lettering on spine. Interior in excellent condition. Slight rippling throughout not affecting text. Some very light discoloration due to aging.throughout not affecting text. Owner's stamp.and inscription on title page. Browning throughout. In Hebrew. Overall in very good condition. On the author (Source: Jewish Encyclopedia): SPEKTOR, ISAAC ELHANAN. Russian rabbi and author; born at Rosh, government of Grodno, 1817; died at Kovno March 6, 1896. (...) Young Isaac Elhanan made remarkable progress in his Talmudical studies, and was soon famous as an "'ilui," or prodigy. At the age of thirteen he married, and settled with his wife's parents in Vilkovisk, where he remained for six years. (...) Spektor received his "semikah," or ordination, from Benjamin Diskin and from R. Isaac Haber of Tiktin (later of Suwalki). The 300 rubles which his wife had brought him as dowry having been lost through the bankruptcy of his debtor, Spektor, (...) became in 1837 rabbi of the small adjacent town of Sabelin, with a weekly salary of five Polish gulden. He remained there in great poverty for about two years, (...) In 1846 Spektor was chosen rabbi of Nishvez, government of Minsk; but the community of Baresa was unwilling to let him go, and he was obliged to leave the town at night. (...) He went to Novohrodok in May, 1851, and remained there until the same month in 1864, when he accepted the rabbinate of Kovno, which he occupied until his death. His sound reasoning, his liberal views, and his love of peace combined to establish him as one of the great leaders of Russian Jewry. Bet Eked V.3 P.718, #249. (Inventory #: 12235)
$325.00 add to cart or Buy Direct from
Eric Chaim Kline Bookseller
Share this item