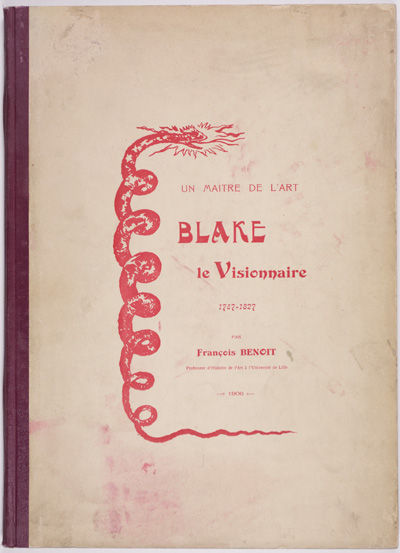 by Benoit, François
Paris, Lille: H. Laurenss, Au Siege de l'Universite, 1906. First edition. Hardcover. vg. 4to. 75 (1) pp. 1/4 red cloth over paper covered boards with red illustration and lettering to cover . Head and tail of spine rubbed. Corners slightly bumped. Significant staining to cover, not affecting text. Illustrated page edges. Light green endpapers, slightly stained. Welling to page following front end paper. Colorful frontispiece. Great work on the great Englsh poet, painter and print maker William Blake 9see below). Delightfully illustrated with color frontispiece, 25 numbered full-page b/w paintings and many in-text illustrations. In French. Cover in good, book in very good condition. On William Blake: William Blake (November 28, 1757-August 12, 1827) was an English poet, painter, and printmaker. Largely unrecognised during his lifetime, his work is today considered seminal and significant in the history of both poetry and the visual arts. According to Northrop Frye, who undertook a study of Blake's entire poetic opus, his prophetic poems form "what is in proportion to its merits the least read body of poetry in the English language." Others have praised Blake's visual artistry, at least one modern critic proclaiming Blake "far and away the greatest artist Britain has ever produced."[1] While his visual art and written poetry are usually considered separately, Blake often employed them in concert to create a product that at once defied and superseded convention. Though he believed himself able to converse aloud with Old Testament prophets, and despite his work in illustrating the Book of Job, Blake's Christian beliefs were modified by a fascination with Mysticism and what is often considered to be his anticipation of the Romanticism unfolding around him.[2] Nonetheless, the difficulty of placing William Blake in any one chronological stage of art history is perhaps the distinction that best defines him. Once considered "mad" for his "single-mindedness" (he lived and died in poverty), Blake is highly regarded today for his expressiveness and creativity, and the philosophical vision that underlies his work. As he himself once indicated, "The imagination is not a State: it is the Human existence itself. (Inventory #: 15170)
$95.00 add to cart or Buy Direct from
Eric Chaim Kline Bookseller
Share this item