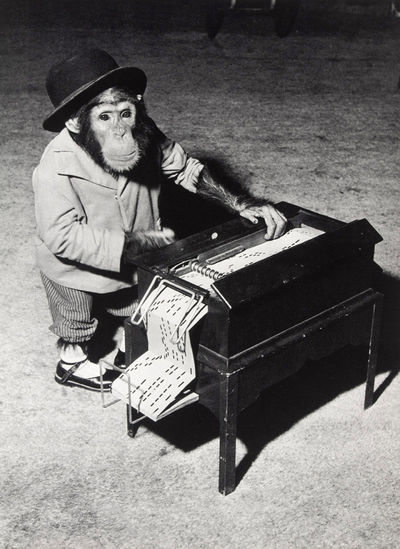 by Prévert, Jacques (Text by); Marc Chagall (Illustrations by); Izis (Israëlis) Bidermanas* (Photographs by)
Monte Carlo: André Sauret, 1965. First edition. Hardcover. g+. Marc Chagall. Folio. 172 pp. Original red cloth with publisher's printed mylar over illustrated dust-jacket. Pictorial endpapers. Color frontispiece by Marc Chagall. Splendid work containing four original circus paintings by Chagall which accompany Jacques Prévert's own text. The numerous striking b/w photographs by Izis Bidermanas follow Prévert's text, rather than being interspersed with it. In this way, Prévert (with Chagall) may be said to present Izis and give greater focus to the photographer's own "circus".) Indeed, Israëlis Bidermanas' photographs are a vast circus-like space of dream, enchantment, laughter, and all possible emotion. Shot mostly in Paris but also in Lyon, Marseille and Toulon, the photographs are "affectionate and nostalgic, but also deeply melancholic" with "a desolate undercurrent", forming a work that is "profound, moving and extraordinary" (Martin Parr and Gerry Badger, The Photobook: A History, vol. 1 (London: Phaidon, 2004) Page 222). Original mylar partly creased and chipped at upper lower margin, slightly affecting lettering. Minor creasing and rubbing along edges of dust-jacket. Slight age-toning along paper margin. Mylar in overall fair, dust-jacket in good+, binding and interior in good+ to very good condition. Israëlis Bidermanas (1911-1980), who worked under the name of Izis, was a Lithuanian-Jewish photographer who worked in France and is best known for his photographs of French circuses and of Paris. Born in Marijampolė, present-day Lithuania, Bidermanas arrived in France in 1930 to become a painter. In 1933, he directed a photographic studio in the 13th Arrondissement of Paris. During World War II, being a Jew, he had to leave occupied Paris. He went to Ambazac, in the Limousin, where he adopted the pseudonym Izis and where he was arrested and tortured by the Nazis. He was freed by the French Resistance and became an underground fighter. At that time he photographed his companions, including Colonel Georges Guingouin. The poet and underground fighter Robert Giraud was the first to write about Izis in the weekly magazine "Unir", a magazine created by the Resistance. Upon the liberation of France at the end of World War II, Izis had a series of portraits of maquisards (rural resistance fighters who operated mainly in southern France) published to considerable acclaim. He returned to Paris where he became friends with French poet Jacques Prévert and other artists. Izis became a major figure in the mid-century French movement of humanist photography - also exemplified by Brassaï, Cartier-Bresson, Doisneau and Ronis - with "work that often displayed a wistfully poetic image of the city and its people." For his first book, "Paris des Rêves" (Paris of Dreams), Izis asked writers and poets to contribute short texts to accompany his photographs, many of which showed Parisians and others apparently asleep or daydreaming. The book, which Izis designed, was a success. Izis joined "Paris Match" in 1950 and remained with it for twenty years, during which time he could choose his assignments. Meanwhile, his books continued to be popular with the public. Among the numerous books by Izis, Gerry Badger and Martin Parr have especial praise for "Le Cirque d'Izis" (The Circus of Izis), published in 1965. (Inventory #: 8104)
$375.00 add to cart or Buy Direct from
Eric Chaim Kline Bookseller
Share this item