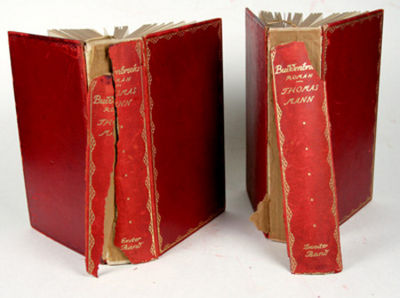 by Mann, Thomas
Berlin: Fischer, 1910. Jubilaumsausgabe. Hardcover. fair. 2 volumes. Small 8vo. 499pp. 477pp. Gilt decorated full-maroon leather with embossed gilt lettering to spines. Top edges gilt. Ribbon markers to both volumes. Title vignette. A classic of German literature (see below). This copy is the anniversary issue celebrating the fiftieth edition of the Thomas Mann's masterpiece, the family sage "The Buddenbrooks", originally published in 1901. Printed on high quality cotton-rag paper. The "Buddenbrooks" is a transition novel, involving both 19th-century realistic style and 20th-century symbolism. Written by acclaimed German writer, essayist, social critic, intellectual and Nobel Prize laureate Thomas Mann (1875-1955), when he was just 26 years old. Chipping, tears, scuffing, rubbing and staining to spines, with lower left corner missing on vol. 1 and upper right corner on vol. 2. Spine of vol. 2 is loose but present. Half of spine of vol. 1 loose but present. Gilt of top edges faded, with slight staining. Ribbon markers 2 stained. Pages clear and clean. In German. Good- condition. Buddenbrooks was Thomas Mann's first novel, published in 1901 when he was 26. It portrays the downfall of a wealthy mercantile family of the German city of Lubeck over four generations. The book is generally understood as a portrait of the German bourgeois society from the 19th century to the beginning of the 20th century. It displays Mann's characteristic ironic and detailed style, and it was mainly this novel which won Mann the Nobel Prize in Literature in 1929. (Inventory #: 16971)
$250.00 add to cart or Buy Direct from
Eric Chaim Kline Bookseller
Share this item