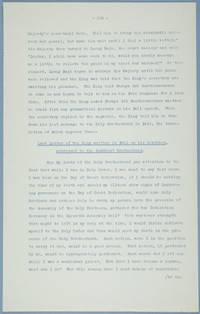 by Pramoj, Seni and Kukrit Pramoj
Bangkok: NP, 1959. vg. Work is a compilation of letters and selected documents issued during the reign of King Mongkut (Rama IV), (1804 - 1868), who was king of Siam from 1851 to 1868. Most Thai were shocked by the portrayal of their revered nineteenth-century king in the musical "The King and I" by Richard Rodgers and Oscar Hammerstein II. The stage and screen versions were based on Margaret Landon's 1944 book "Anna and the King of Siam." To set the record straight, well-known Thai intellectuals Seni Pramoj and Kukrit Pramoj wrote this account in 1948. The Pramoj brothers sent their manuscript to the American politician and diplomat Abbot Low Moffat (1901-1996), who drew on it for his biography "Mongkut the King of Siam" (1961). Loose-leaf mimeograph manuscript. All pages are present and in a cardboard slipcase. In very good - fine condition. Historians have widely regarded Mongkut as one of the most remarkable kings of the Chakri Dynasty. Prince Mongkut was five years old when his father succeeded to the throne in 1809. According to the law of succession, he was the first in line to the throne; his influential half-brother, Nangklao (1788 - 1851), was strongly supported by the nobility to assume the throne. Prince Mongkut decided to enter the Buddhist priesthood and traveled in exile across Thailand, during which time he founded the Thammayut Nikaya Reform Movement (a sect of Theravada Buddhism) that later became one of the two denominations of Buddhism in Thailand. Mongkut's aim was to upgrade monastic discipline and make it more orthodox, after noticing what he saw as serious discrepancies between the teachings and actual practices of Thai monks. Prince Mongkut spent the following 27 years integrating Western knowledge with Thai culture, studying Latin, English, astronomy and the arts. (Inventory #: 18278)
$950.00 add to cart or Buy Direct from
Eric Chaim Kline Bookseller
Share this item